Scientists at Switzerland’s CERN research centre say they have found signs of a theoretical sub-atomic particle believed to be the basic building block of the universe.

The scientists conducted two separate experiments to try to locate the so-called God particle, wherein protons were fired into each other inside a 27Km long tunnel.

They have stopped short of calling it an official discovery, but the research has got the science world buzzing. 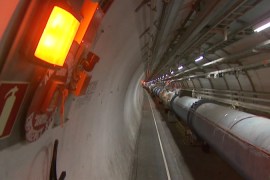 Physicists due to release data on hunt for particle that could help explain universe’s origins.