Yemen’s national unity government was sworn in on Saturday in the presence of Vice President Abdrabuh Mansur Hadi, an official statement said.

The statement, carried by the official Saba news agency, said the swearing-in ceremony took place at the Republican Palace in the capital Sanaa.

The new 34-member cabinet, headed by Prime Minister Mohammed Baswinder will now lead Yemen for a three-month transition period, after which President Ali Abdullah Saleh is expected to formally step down after 33 years in power.

The unity government will carry out its duties until early elections are held in February, after which Hadi will take over the presidency for an interim  two-year period as stipulated by the Gulf-sponsored deal to resolve Yemen’s political crisis.

Half of the new cabinet posts were given to members of the opposition Common Forum, while Saleh loyalists were appointed to the other half, under the gulf plan.

The Gulf plan also gave Saleh and his close relatives immunity from  prosecution for crimes committed in the uprising against his rule that has left  hundreds of people dead and thousands more wounded since it began in January.

However, the protesters who have thronged the streets of the capital and other Yemeni cities have rejected the immunity clause and continue to demand Saleh goes on trial.

The government faces a host of challenges including sporadic fighting with anti-Saleh tribesmen, a southern separatist movement, a Shia Muslim rebellion in the north and a regional wing of al Qaeda that has exploited the upheaval to strengthen its foothold in the poor Arabian peninsula country.

On Friday, a soldier was killed in fighting between government forces and opponents of Saleh on the streets of Sanaa.

The violence near government buildings and the compound of Sadeq al-Ahmar, a foe of Saleh who commands significant forces, was the latest challenge to the transition plan after 10 months of anti-Saleh protests. 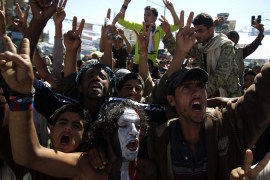 Details of new government, which includes a 35 member cabinet, released amid continued violence in capital. 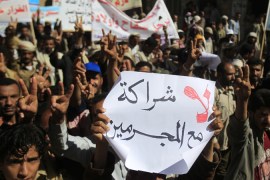 Mohammed Basindwa says interim administration to be formed within two days, amid lull in fighting in city of Taiz. 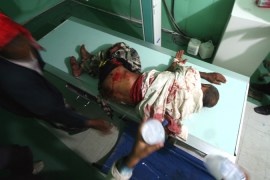 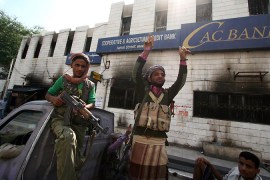