Syrian forces killed more than 40 people, including four children, after firing on anti-government demonstrations across the country on Friday, activists have said.

Two boys, aged 10 and 12, were hit by stray bullets near government checkpoints on Friday in Homs, Syria’s third-largest city and a hotbed of opposition to the government, according to the London-based Syrian Observatory for Human Rights (SOHR). Another activist group, the Syrian Revolution General Commission, said three defected soldiers had also been killed there.

Activists dubbed Friday a “Dignity Strike” and had hoped to stage a mass display of civil disobedience.

Outside of Homs, there were also reports of violence and arrests in Aleppo, Idlib province, and Damascus, the capital.

The opposition Syrian National Council warned of an impending “massacre” in Homs, claiming thousands of troops and armed men were encircling the city.

In response, the UK called on the Syrian forces to withdraw from the city, and the US state department said it was “extremely concerned” by the reports and that President Bashar al-Assad would be responsible for further any deaths.

‘The earth was shaking’

Many of Friday’s deaths were reported from Homs. Activists said gunfire left “many” injured in the Khaldiyeh neighbourhood, where well-known actress Fadwa Soliman led a demonstration.

“The earth was shaking,” a Homs resident told the Associated Press by telephone, saying explosions and cracks of gunfire erupted in the early morning. “Armoured personnel carriers drove through the streets and opened fire randomly with heavy machine guns.”

Rami Abdul-Rahman, the head of the SOHR, said a 10-year-old was shot as he crossed the street in the Bab Sbaa neighbourhood of Homs and a 12-year-old was struck as he walked in a crowd exiting a mosque. Elsewhere, a 14-year-old boy was fatally wounded in Aqrab, and a 15-year-old boy died in Maarat al-Numan, activists said.

The violence came after Assad, embattled by nine months of protests against his rule, claimed in a rare interview with a US television network that he had not ordered a crackdown and that the United Nations’ claim of 4,000 dead during the uprising was wrong.

UN Secretary-General Ban Ki-moon hit back at that statement on Friday, saying “all the credible information” supported the UN count.

The reports could not be verified because Syria has banned most foreign journalists and prevented independent reporting. Accounts from activists and witnesses, along with amateur videos posted online, provide key channels of
information.

The violence comes as the government tries to choke off a nine-month uprising demanding the ouster of President Assad, whose family has ruled Syria for more than 40 years.

Despite sanctions from the United States and European Union, increasing isolation from its Arab neighbours and a demand from the UN to allow observers in, Assad has refused to buckle to the pressure.

Activists had hoped to use the “Dignity Strike” as a means to regain momentum for a peaceful protest movement after sectarian kidnappings and killings escalated in Homs this week, said Al Jazeera’s Rula Amin, reporting from Beirut.

But the opposition remains somewhat split between the Syrian National Council (SNC), an Istanbul-based body, and the National Co-ordination Committee for Democratic Change, which is based inside Syria and advocates dialogue with Assad.

“The problem at this point is that the Arab League is insistent on unifying everyone in the opposition,” Louay Safi, an SNC member, told Al Jazeera, adding that his group represented the bulk. “The problem is some factions … don’t represent the revolutionary forces. They are traditional political actors.”

Neighbouring Turkey urged Assad to punish his security forces and accept an Arab League observer mission if he is “sincere” in his repudiation of violence against civilians.

“If he is sincere, he will punish the security forces, he will accept the Arab League observers and help change the atmosphere,” Foreign Minister Ahmet Davutoglu said on Friday. “He still has the opportunity to do this.”

Turkey meanwhile moved to suspend a 2008 free trade agreement with Syria, which will lead to the imposition of taxes of up to 30 per cent on some Syrian goods, authorities said.

The move, like most of the economic measures taken against Syria, is likely to hit the business class, which until now has been one of the main props of the government.

Syria already unilaterally suspended the free trade agreement, but Turkey’s cabinet needed to approve the suspension so it can collect the taxes.

“We are having tensions with Syria,” Yazici said. “Of course, our trade is important but our stance based on humanitarian values is above everything.” 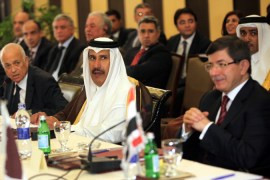 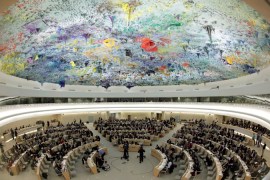 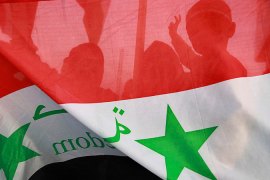 ‘Scores dead’ in Syria after kidnappings

Activists say at least 79 people killed in sectarian clashes in Homs, as US ambassador prepares to return to Damascus. 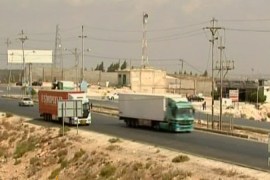 Jordan backs out of sanctions against Syria