A four-seater cargo plane has crashed into a crowded Philippine slum, killing at least 13 people after it sparked a fire.

Police chief inspector Enrique Sy said the Saturday morning crash killed the pilot and co-pilot, while the rest of the victims were thought to be people on the ground.

“So far, we have recovered 13 badly burned bodies from the crash site, including one near the wreckage,” he said, adding it was impossible to identify the victims.

“The plane struck one house but the others also went up in flames. These are informal settlers, packed into rows of houses.”

Three of the dead were children.

Ramon Gutierrez, head of the Civil Aviation Authority of the Philippines, told DZBB radio in an interview that the pilot had asked to be allowed to make an emergency landing back at Manila airport shortly after take-off.

“Unfortunately, the plane did not make it,” he said, adding that the cause of the crash was not immediately known.

He said the plane would have been carrying a full tank of fuel when it crashed. It was scheduled to pick up cargo from the nearby island of Mindoro, he added.

Resident Maribel Savedoria tearfully recounted how her husband perished in the blaze after pushing her and their four children out through the window of their rented room.

“He pushed all of us out to save us, but he did not make it. There was an explosion and all my children sustained burns,” she told DZBB radio.

Florencio Bernabe, the mayor of Paranaque district where the crash occurred, said that at least 50 shanties burned down and at least 20 injured victims had been taken to hospital.

The blaze engulfed a nearby elementary school, but it was empty at the time because it was the weekend.

Up to 30,000 people lost their homes in successive slum fires in Manila in February.

More than 2.5 million people – nearly a quarter of Manila’s population – now live in slums, according to the government’s Metropolitan Manila Development Authority. 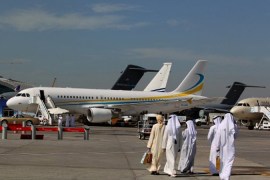 Up in the air

A special edition from the Dubai Air Show: how is the global financial crisis effecting the aviation industry? 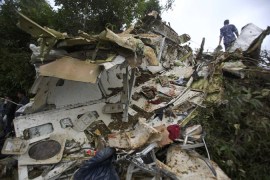 No survivors in Nepal air crash

Nineteen confirmed dead as small aircraft returning from a mountain flight to Everest goes down in heavy rain and fog. 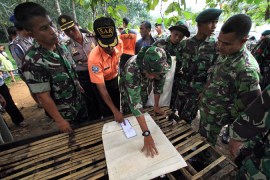 Survivors sought after a small plane carrying 18 people crashes in a mountainous area between North Sumatra and Aceh.