China says its armed police have begun a joint patrol of the Mekong river with forces from neighbouring Myanmar, Laos and Thailand, in a bid to protect its nationals in the violence-troubled region.

The patrols are a response to the deaths of 13 Chinese sailors who were attacked in October in the Golden Triangle region, where the borders of Myanmar, Thailand and Laos meet in an area notorious for drug smuggling.

Beijing has long contributed police to UN peacekeeping missions overseas, but this is believed to be the first time they will work in another country’s territory without a UN mandate.

Drug smugglers were initially suspected over the deaths, but nine Thai soldiers later turned themselves in over the killings.

The Chinese force is made up of more than 200 officers and men drawn from border patrol units along China’s coast and major rivers.

They will sail in 11 converted flat-bottomed passenger and cargo ships based in the Mekong River port of Guanlei, on China’s border with Myanmar.

State broadcaster CCTV ran footage showing the troops holding drills on board a ship with the latest models of Chinese assault rifles.

“It’s the first time in the history of Chinese border guarding to go abroad to another country to jointly enforce the law.”  Liu Jianhong, the force’s political commissar, told CCTV.

“This is a groundbreaking model of a police co-operation mechanism,”

In addition to the patrols, China will host a multinational Mekong river security headquarters at Guanlei staffed by officials from the four countries.

The communist state has also offered to dispatch experts to help train security personnel in Myanmar and Laos.

The 4,900km Mekong snakes from China into Southeast Asia, where it forms the border between Myanmar and Laos, and then Thailand and Laos.

In 2001, the four countries signed an agreement to regularise shipping on the river.

China’s growing presence in Asia, Africa and other parts of the world has prompted attacks, kidnappings and hijackings of its nationals and the issue has become a sensitive one for Chinese officials.

While China has long eschewed overseas military deployments and alliances, its growing economic interests abroad have compelled it to re-evaluate such notions.

At the end of 2008, Beijing began sending naval vessels to take part in anti-piracy patrols in the Gulf of Aden off Somalia’s coast, helping to escort both Chinese ships and those carrying UN food aid. 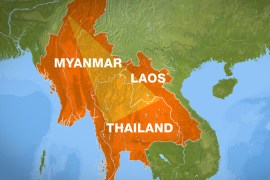 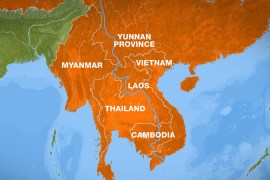 Soldiers are thought to be linked with the deaths of 13 Chinese sailors on the Mekong river in Thailand.