Egypt’s election commission has lowered its turnout figure from a first round of voting in the country’s parliamentary polls from 62 per cent to 52 per cent, citing a mistake in counting.

The admission on Monday came as Egyptians again flocked to the polls to cast their ballots in run-off elections for 52 seats in which no clear winner emerged.

“The accurate percentage of attendance in the first round was 52 per cent, not 62 per cent,” Abdel Moez Ibrahim, head of the High Elections Commission, told Al Jazeera at a news conference in Cairo.

He said members of the commission’s secretariat made the error, adding that he “was exhausted” when he gave initial figures at a news conference last week.

The first round of voting in the elections, which began on November 28, saw long queues of people forming outside polling stations across the country.

Al Jazeera’s Sherine Tadros, reporting from a voting station in the Cairo district of Mattariya on Monday, said the crowds were not as plentiful for the run-off vote, which is to be held on Monday and Tuesday.

“One of the main reasons for the lower turn out could be because Egyptians weren’t given the day off work as they were a week ago in the original vote,” she said.

However, a steady stream of residents still turned out in nine governorates across the country to vote, she said, in a run-off that often pitted two candidates representing Islamist parties.

Islamist parties captured an overwhelming majority of votes in the first round of Egypt’s parliamentary elections, setting up a power struggle with the much weaker liberals who were behind the initial uprising that toppled former president Hosni Mubarak 10 months ago.

The Muslim Brotherhood’s Freedom and Justice Party (FJP) has been the biggest winner, taking 36.6 per cent of the vote, and it looked set to make further gains in the run-off.

Its stiffest competition came from the Nour Party, a religious group that wants to impose strict Islamic law.

The Nour Party also made a strong showing with nearly a quarter of the 9.7 million valid ballots cast, according to results released on Sunday.

The tallies offered only a partial indication of how the new parliament will look. There are still two more rounds of voting in 18 of the country’s 27 provinces over the coming month.

But the influence of the Islamists over the next parliament appears set, particularly considering their popularity in provinces voting in the next rounds.

‘Conflict over soul of Egypt’

The new parliament will be tasked, in theory, with selecting a 100-member panel to draft a new constitution.

But adding to tensions, the ruling military council that took over from Mubarak has suggested it will choose 80 of those members, and said parliament will have no say in naming a new government.

“The conflict will be over the soul of Egypt,” said Nabil Abdel-Fattah, a senior researcher at the state-sponsored Al-Ahram Centre for Political and Strategic Studies, calling the new parliament “transitional” with a “very conservative Islamic” outlook.

The Brotherhood’s FJP has emerged as the most organised and cohesive political force in these elections. But with no track record of governing, it is not yet clear how they will behave in power.

The FJP has positioned itself as a moderate Islamist party that wants to implement Islamic law without sacrificing personal freedoms, and has said it will not seek an alliance with the more radical Nour Party.

The ultraconservative Salafis who dominate the Nour Party are newcomers to the political scene. They had previously frowned upon involvement in politics and shunned elections.

They espouse a strict interpretation of Islam similar to that of Saudi Arabia. Its members say laws contradicting religion cannot be passed.

Egypt already uses Islamic law, or Sharia, as the basis for legislation. However, laws remain largely secular as Sharia does not cover all aspects of modern life. 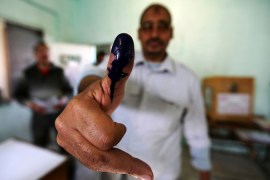 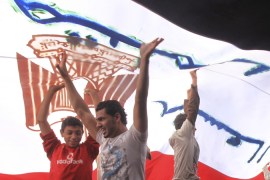 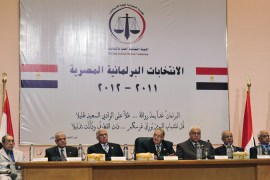 Islamists expected to make the biggest gains after 62 per cent vote in first round of parliamentary elections. 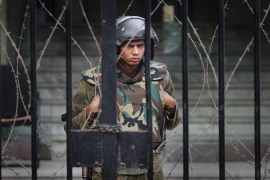 Egypt’s revolution will not be militarised

Since Mubarak’s ousting, Egypt’s military has blocked the road to democratic rule in an attempt to stay in power.