According to the Reuters news agency Papandreou’s government is now ready to hold talks with the opposition on its demands for a caretaker government until snap elections are held.

The opposition New Democracy party had earlier on Thursday called for a transitional government to lead the country until it secures a vital aid payment from foreign lenders, with a view to new elections after the funds are received.

Al Jazeera’s Jonah Hull, reporting from Athens, said it had been unclear whether senior members of Papandreou’s cabinet would speak with one voice on the referendum.

“Now it appears they don’t …Venizelos is a very senior member of the Socialist party. He’s thought to be next in line for the leadership of the party,” he said.

“He’s not thought to be a major fan of the prime minister and is not happy with the way all of this has played out. Indeed, he was not even told about the referendum before it happened.” 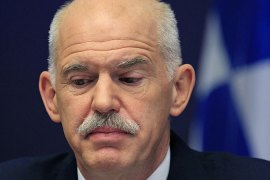