Goma, Democratic Republic of Congo – Voting has opened across the DRC and thousands of voters are expected to return to polling stations to cast their ballot after not being able to do so on Monday.

The National Independent Electoral Commission (CINA) announced late on Monday evening that voting would be open on Tuesday to deal with those who were unable to vote due to long queues until close of polls. In precincts where ballot materials had arrived on time, vote counting was underway.

Cyrille Mihona, a senior electoral official, told Al Jazeera’s Azad Essa that votes were being counted and consolidated results would be released by 18:00 local time.

Meanwhile, electoral workers at one polling station alleged they had not been paid for running the elections at their electoral office.

Around 77 workers who ran the voting process at the La Joie school were conducting a sit-in at 18 offices, and refusing to release equipment until they are paid.

“We worked from 5am on the 28th until 8am this morning – managing the process and counting all the ballots,” Landry Nkela, 24, told Al Jazeera.

Workers could be seen sleeping on benches inside the polling stations and Nkela complains they haven’t eaten since voting started.

Almost 32 million Congolese travelled to tens of thousands of polls across the country to vote in an election marred by reports of clashes, and reports of vote rigging.

International observers said they had stumbled upon what may be a case of ballot stuffing in the country’s east.

Rain lashed down on voters in Kinshasa as well, slowing the influx of voters.

But in Goma, the capital of North Kivu, touted as among the most volatile regions in the country, voting took place, mostly in perfect weather, mostly without incident.

The usually bustling city almost came to a standstill as hundreds of thousands descended on polling stations across the city, arriving on foot or motorbike taxis with hundreds already in zigzag queues outside polling stations.

Queues waited outside school classrooms as Independent Electoral Commission (CENI) ran final preparations to set up the voting process. By early morning, budding entrepreneurs arrived with freshly picked bananas, cakes and nuts to sell to the thousands set for a long day in the sun.

Despite the delays, voters remained optimistic about the role of the ballot in changing their reality.

“I was extremely excited to vote for my candidate,” Christina Mobwana, 29, said as she stuck out her inked finger to illustrate she had just cast her ballot.

“We are voting because we want the current reality to change and adjust,” Mobwana told Al Jazeera. Change, peace and development are recurring themes among voters in Goma.

Residents say that the city lacks basic services and they are done waiting for Joseph Kabila, the incumbent president, to deliver on promises made five years ago.

They say they want the city to normalise, for primary schooling to be free, health services to improve and a city that functions.

Stories abound of continuous corruption, unpaid wages, and that that half of Goma battles to access electricity, while one third of residents lack access to running water.

“In 2006, we voted for Kabila who made promises to us, which he didn’t keep. Now we are saying, let’s try another candidate,” Francine Butodu, 26, on her way to the polls late on Monday afternoon said.

If the candidate fails, they will replace him as well, Butodu says.

As voters continued to stream in during the day, those departing the polling stations on trucks and mini busses chanted as they drove by pedestrians lifting either three fingers, indicating support for Kabila or all five fingers for Vital Kamerhe, the most popular presidential candidate in east,  based on both candidate’s numerical position on the ballot sheet.

Support for Kamerhe in the east has risen exponentially, though most supporters admit that they are mostly in opposition to Kabila reelection.

CINA’s incompetence and perceived linkages with the ruling Kabila has ordinarily raised suspicions of mismanagement and corruption, so much so that many locals allege that a Kabila victory will essentially mean electoral fraud.

“The opposition failed to unite; we have plurality, and we know that this is a problem. But the existing power cannot win this election,” Bienfait Manegabe, a lawyer and candidate in the national legislature told Al Jazeera.

Manegabe says that if Kabila wins, the DRC country will burn.

“No one is ready to hear that Kabila will be reelected. If he wins, this country will fragment, and break up,” he says resolutely.

But Berchmans Ndumuago, the president of the polling station complex Kizito, a medical school in Goma, said that his electoral team experienced few problems and that there was no possibility of rigging.

But Xayita Mxolisi, Southern African Development Community electoral official, said that based on their observations in Goma on Monday, the voting process was free, and when the counting begins, they will ascertain whether the entire process was transparent and fair.

“There was a misunderstanding at one polling station earlier in the day, but that was resolved within a half hour, and from what we observed, the level of violence was almost null and the fact that people are still standing here, waiting in queues as stations are meant to close, suggests that there has been no intimidation or compulsion.

“I can’t comment about other other areas, but I can confidently say that elections in this area, was free,” Mxolisi told Al Jazeera.

“Now it is essentially a case of the losing party’s ability to accept defeat,” he added.

Voting continued even after sunset on Monday until CINA ordered the closure of polls and the extension of voting into Tuesday. 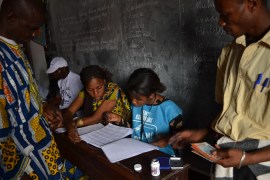 In Pictures: Congolese hit the polls in Goma 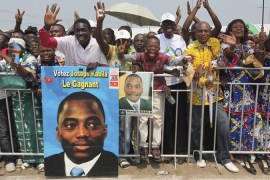 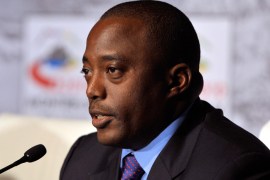 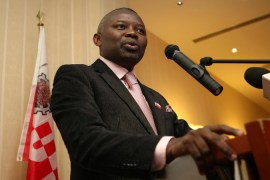 Nicknamed the ‘peacemaker’, the former ally of Jospeh Kabila is the surprise package of this year’s general election.