South Korea’s president has signed a package of laws needed to implement the country’s free trade deal with the United States in Seoul, South Korea’s capital.

Lee Myung-bak signed on Tuesday 14 bills, including matters such as fair trade, monopoly regulations and local taxes, a week after his ruling party push them through the National Assembly along with the US trade accord, Seoul’s Yonhap news agency reported.

Trade officials say Lee already signed off on the trade deal itself earlier this year before asking for parliament’s approval.

Economists believe the deal could boost the $67b in annual trade between the two countries by up to 25 per cent.

Seoul and Washington hope to get the deal into effect as of January 1, 2012, after holding talks to discuss various implementation details.

Activists, including residents and parliament members, have been staging almost daily rallies denouncing the accord, arguing that it favours the US over South Korean workers.

One politician from the opposition Democratic Labour Party set off a tear-gas device, briefly clearing the chamber in
parliament.

South Korean car manufacturers appear to be the winner in the deal while farmers feel they will struggle to compete with US imports.

Lee called for thorough measures to minimise any damage the deal could have on local industries and stressed that
the country should use the agreement as a chance to strengthen its competitiveness, the agency added.

The pact is America’s biggest free trade agreement since the 1994 North American Free Trade Agreement with Canada and Mexico.

Two-way trade between South Korea, Asia’s fourth largest economy, and the United States totalled about $90b last year, according to the South Korean government. 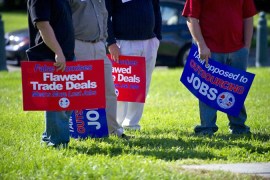 Pros and cons of US free-trade deals 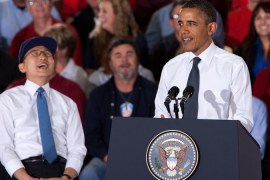 The Congress-approved free trade deal is expected to bring the leaders of the US and South Korea closer together. 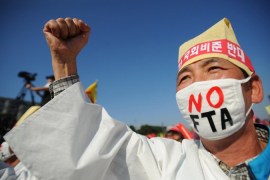 Democratic Party seeks to block ratification of the accord on the grounds that it is a “one-sided” deal.