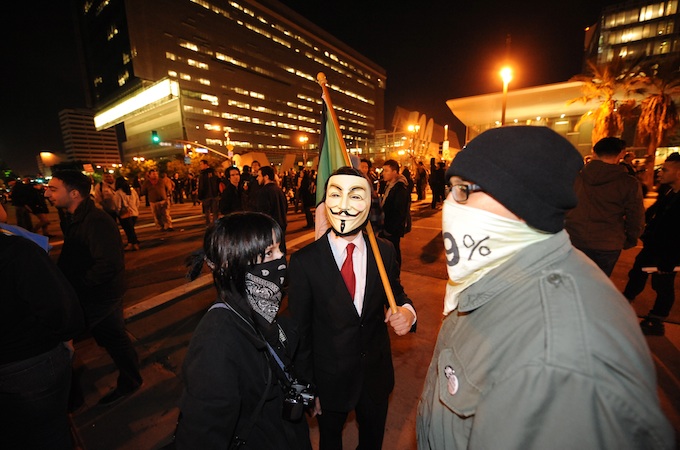 Organisers had described a festive atmosphere in Los Angeles, with protesters leading chants on bullhorns [EPA]

The detentions came after hundreds of people gathered in the street after the passing of midnight deadline to vacate a city hall park encampment.

Water bottles and bamboo sticks were thrown towards police as officers in riot gear started clearing 1st and Main streets just after 5am on Monday.

At 4:50am, police on loudspeakers declared an unlawful assembly and protesters were told to get out of the street within five minutes.

Commanders then corralled demonstrations back to the city hall park, telling them they would not be arrested there.

Many tents were also dismantled as the deadline loomed.

Protesters had been camping in the park for nearly two months and Mayor Antonio Villaraigosa had given a midnight deadline for them to leave.

But around 1,000 protesters began flooding into the streets before the deadline.

Protesters described a celebratory atmosphere, with organisers leading chants as a man wearing a cow suit rode a bicycle around the block.

“The best way to keep a non-violent movement nonviolent is to throw a party, and keep it festive and atmospheric,” Brian Masterson told the AP news agency.

The police presence was initially slight, though it increased as the night wore on. Andrew Smith, a police commander on the scene, said the crowd was then “co-operative”.

Meanwhile, in Philadelphia, dozens of tents remained at an encampment also outside of city hall.

The mayor had asked protesters to leave and make way for a construction project. No arrests were reported early Monday, and the camp was mostly quiet.

Reactions to police tactics have varied across the country, as pepper spray and tear gas have been used to remove demonstrators.

Elsewhere on the east coast, eight people were arrested in the state of Maine after protesters in the Occupy Augusta encampment took down their tents and packed away their camping gear after being told to get a permit or move their shelters.

The Occupy Wall Street movement started in September as a march on New York’s financial district to protest against corporate greed and income inequality.

It quickly developed into a national movement centered on tent camps in New York, Washington, Oakland and other cities.