Ban Ki-moon, the UN chief, has appealed for calm ahead of Monday’s presidential election in the Democratic Republic of Congo (DRC), following deadly clashes in the capital, Kinshasa.

Ban warned the government on Sunday that it has “primary responsibility” for maintaining peace in the giant minerals-producing nation.

“I call on all political leaders and the people of the Democratic Republic of the Congo to exercise restraint throughout the process to ensure that the elections are held in a peaceful and secure environment,” Ban said in a statement.

Three people were killed in campaign-linked violence on Saturday.

Police had stopped opposition leader Tshisekedi and his entourage from leaving Kinshasa’s N’djili airport on Saturday after his party said it would defy the ban on political rallies imposed earlier in the day.

Meanwhile, Tshisekedi called for Ban to remove the head of the UN’s 20,000-strong peacekeeping mission and replace American Roger Meece with someone “more impartial and competent”.

In a second attempt to ignore the political ban, Tshisekedi called on supporters to attend a rally in Kinshasa on Sunday.

“He wants to hold a rally at the Stade des Martyrs [the city’s largest stadium] to make up for lost time,” Serge Mayamba, national secretary of Tshisekedi’s Union for Democracy and Social Progress (UDPS), told the AFP news agency.

A day earlier, violence broke out when security forces used tear gas and live fire to disperse crowds. Rival factions hurled rocks at each other and gunfire was heard across town.

The run-up to DR Congo’s second election since the 1998-2003 war has been marred by opposition allegations of irregularities and concerns about inadequate preparations.

The UN secretary-general appealed to all sides to stick to the constitution and election laws.

Ban called on the rival parties to “promote democratic debate; to respect the results of the ballots; and to address any disputes that may arise, through the established mediation and legal channels”.

Under constitutional amendments signed off by Kabila this year, the presidential vote will be decided in a single round, meaning the winner can claim victory with a simple majority.

Analysts say that favours Kabila against the split opposition.

Despite a logistics operation supported by helicopters from South Africa and Angola, some observers doubt whether all ballot slips will reach the 60,000 voting stations by Monday, in a country two-thirds the size of the European Union.

Al Jazeera’s Yvonne Ndege, reporting from the capital, said, “We’ve heard complaints that many election materials have not been delivered to key areas and discovered that some polling stations still haven’t received [ballots]”.

“We would like to assure you 99 per cent of things are working perfectly, that’s our commitment to you,” Daniel Ngoy Mulunda, electoral commission chief, said on Sunday.

Kabila’s rivals say fake polling stations have been set up to allow vote-rigging, an allegation denied by the authorities.

“The opposition is diverse, to say the least, with eleven candidates from various parts of the country,” our correspondent said. “That will play into Kabila’s hand, since this is only the second democratic poll to take place is 51 years.”

“People say there’s only a certain amount of expectation you can have, with more than 31 million people taking part.” 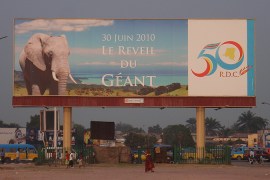 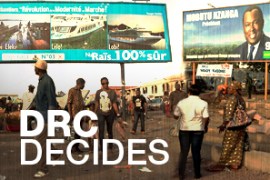 Follow our in-depth coverage in the aftermath of elections critics say were marred by fraud. 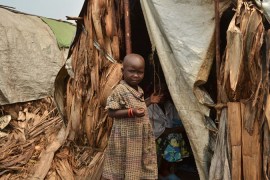 For the internally displaced living in DRC’s camps, voting in Monday’s election is a first step towards returning home. 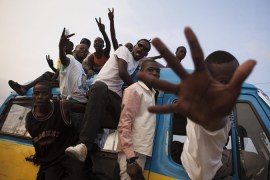 Deadly clashes in DRC capital ahead of vote

At least three people killed in Kinshasa as rival campaign rallies are concluded ahead of Monday’s vote.