Tens of thousands of demonstrators packed Cairo’s Tahrir Square on Friday after days of deadly clashes, demanding Egypt’s military rulers step down and rejecting their choice of new prime minister.

Tensions have risen in Egypt in the lead-up to parliamentary elections, due to start on Monday. However, the streets were relatively calm throughout Friday’s demonstrations as a truce negotiated the day before in Cairo continued to hold.

Clusters of activists remained in the square, which has once again become a focal point of opposition to the government, on Saturday morning.

Amid the ongoing turmoil, the governing Supreme Council of the Armed Forces (SCAF) has asked Kamal el-Ganzouri, 78, a prime minister under deposed president Hosni Mubarak, to head a new cabinet.

“Previous cabinets over the past 60 years were given many powers by the president of the republic,” Ganzouri said on Friday in his first public statement after his appointment.

But he had been granted “much more powers” than past predecessors, said Ganzouri, who served as Mubarak’s prime minister between 1996 and 1999.

Protesters in Tahrir Square quickly rejected his appointment, saying he was not the man to lead a transition to democracy.

“I think he was popular in his era, and successful. He did good during his period, but this is not his time,” Abdullah Ahmed 22, a university student, said.

Hundreds of protesters in the square later branched off to the nearby cabinet offices in a bid to prevent Ganzouri from entering the building, an AFP reporter said.

About 5,000 supporters of the military staged their own demonstration on Friday several miles north of Tahrir Square in the district of Abbassiyah, not far from the defence ministry building.

“Waving giant Egyptian flags and chanting slogans praising Tantawi, the protesters filled every inch of free space under the Abbassiyah Bridge, some even lined up along its ramps despite the passing traffic,” Al Jazeera’s Malika Bilal reported from Cairo, referring to Field Marshal Mohamed Hussein Tantawi, who heads the SCAF.

“The army and the people are one hand,” they yelled in unison, the sound of drums and car horns adding to the chorus of sounds.

Ganzouri’s appointment was announced by Egypt’s state television following a meeting late on Thursday between him and Tantawi.

Tantawi was Mubarak’s defence minister of 20 years and served in Ganzouri’s earlier government.

It was the latest in a series of efforts by the military to appease protesters without meeting their main demand of stepping down immediately.

The generals also apologised on Thursday for the killing of about 40 protesters in deadly clashes, mostly centred around Tahrir Square.

This was the longest spate of uninterrupted violence since the 18-day uprising that toppled Mubarak on February 11.

The choice of Ganzouri has, however, only antagonised the protesters, already angry over the military’s perceived reluctance to dismantle the legacy of Mubarak’s 29-year rule.

Ganzouri replaces Essam Sharaf, who resigned this week after nearly nine months in office amid deadly clashes between police and protesters calling for an end to military rule.

Sharaf was criticised for being weak and beholden to the generals.

The military has said parliamentary elections will be held on schedule despite the unrest in Cairo and several other cities to the north and south of the capital.

Voting in each phase of the three-stage parliamentary election will be held over two days instead of one, the SCAF announced on Friday.

Voting starts on Monday and concludes in March, meaning that Ganzouri could be prime minister only until a new government is formed following the seating of a new legislature.

Friday’s protest in Tahrir Square was dubbed by organisers as The Last Chance Million-Man Protest.

Swelling crowds chanted, “Leave, leave!” and “the people want to bring down the field marshal”, in reference to Tantawi.

Mohamed ElBaradei, the pro-reform leader and Nobel Peace laureate, was mobbed by hundreds of supporters as he arrived in Tahrir Square and took part in Friday prayers, leaving shortly afterwards.

The demonstrators have vowed not to leave the area until the generals step down in favour of a civilian presidential council. Their show of resolve resembles that of the rallies which forced Mubarak to relinquish power.

Thousands of pro-democracy protesters also took to the streets in other cities, including at least 10,000 in the Mediterranean port city of Alexandria and smaller crowds in Luxor and Assiut in southern Egypt.

The military has rejected calls to immediately step down, saying its claim to power is supported by the warm welcome given to troops who took over the streets from the discredited police early in the anti-Mubarak uprising as well as an overwhelming endorsement for constitutional amendments they proposed in a March referendum.

Tantawi has offered another referendum on whether his military council should step down immediately.

Such a vote, activists say, would divide the nation and likely open the door for a deal between the military and political groups, particularly the Muslim Brotherhood.

Egypt’s largest and best organised group, the Brotherhood was empowered after the fall of Mubarak, regaining legitimacy after spending nearly 60 years as an outlawed group.

A survey of voter trust in the military, conducted for Al Jazeera by Vote Compass, showed a sharp decline since the country erupted into protest in January, but also suggested that many Egyptians still believe the army is a source of stability. 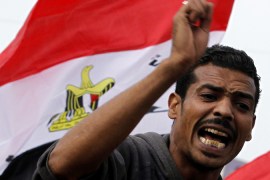 Diverse opinions about the protests in Cairo’s Tahrir’s Square come from citizens elsewhere in the city. 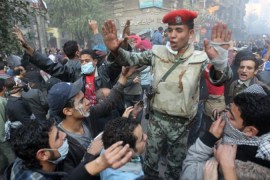 Survey reveals country still split in its attitude to the military, with many still seeing it as a stabilising force. 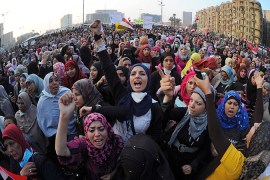 In Egypt, the rush towards constructing a democracy is choking the country’s current revolutionary ethos.