The bound and gagged bodies of 26 young men were found dumped in the heart of Mexico’s second-largest city, in what experts said could mark a new stage in the full-scale war between the country’s two main drug cartels.

The bodies were found early on Thursday in two vans and a pickup truck abandoned on an expressway near the Milennium Arches in Guadalajara, one of the most recognisable landmarks in the city, according to several local media.

Most of the men died of asphyxia, according to officials in Jalisco state where Guadalajara is located, though initial reports indicated some had been shot.

Mexican drug cartels frequently leave threatening messages with the bodies of their victims as a way of sowing fear and taking credit for their actions.

The victims, apparently between the ages of 25 and 35, all had the words “Milenio Zetas” or “Milenium” written on their chests in oil, said Jalisco state Interior Secretary Fernando Guzman Perez.

A law enforcement official who was not authorised to speak on the record said the writing was apparently meant as the killers’ calling card, identifying the assassins as being from the Zetas and a smaller, allied gang, the Milenio Cartel.

The official said a banner found in one of the vehicles, whose contents Guzman Perez refused to reveal, was in fact signed by the Zetas.

The killings, apparently carried out before dawn, bore an eerie similarity to the September 20 dumping of 35 bodies on an expressway in the Gulf coast city of Veracruz.

On Wednesday, Mexican authorities found the burned bodies of 16 people in a strikingly similar attack in Culiacan, the capital of Sinaloa state, and home state of the country’s powerful drug lord, Joaquin “Shorty” Guzman.

Twelve of the bodies were in the back of one truck, some of them handcuffed and wearing bulletproof vests.

Our correspondent said the federal government was steadfast in its decision to continue using the full force of the state to battle the Zetas and the Sinaloa cartel.

“Despite all of those efforts … these kinds of killings continue here and there’s a sense at times that the federal government is really unable to control these kinds of possible revenge killings by trafficking organisations,” he said.

Felipe Calderon, Mexico’s president, has deployed the army to crack down on powerful criminal gangs and some 45,000 people have died in the conflict since he took office. 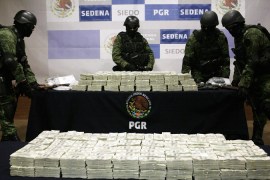 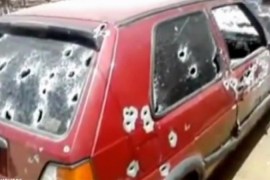 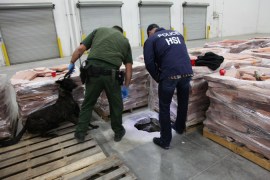 At least 14 tonnes of marijuana found inside “sophisticated” cross-border tunnel, leading to arrest of two people.