Officials in Yemen say heavy fighting broke out in the Yemeni capital between security forces and army defectors despite the signing of a recent deal to transfer power.

One man from each side was killed in Friday’s clashes in Sanaa, a military official said.

Central security forces under the command of Ali Abdullah Saleh’s nephew battled the army’s First Armoured Division, led by a general who defected to the opposition in March, the official said.

The protests in Sanaa and the southern city of Taiz followed Saleh’s signing of a deal on Wednesday in Saudi Arabia, brokered by the six-nation Gulf Co-operation Council, transferring power in exchange for immunity from prosecution.

Many protesters say the deal – under which Saleh will leave the president’s office in 30 days.- falls short of their demands because many crucial positions in the government and the military are held by Saleh’s family and friends.

Five protesters were killed in Sanaa on Thursday as government loyalists dressed in plain clothes reportedly opened fire on the protesters from rooftops and moving cars.

“The blood of the martyrs which has thrown you out of power, Saleh, will throw you in prison,” Fuad al-Hanjari, a preacher, told activists after funerals in Sanaa on Friday for four of the victims.

Al Jazeera’s special correspondent, reporting from Sanaa, said the protests went off peacefully and that the clashes had occurred in a different part of the city.

“The protests have gone off peacefully. But obviously the crowds are very angry here. The fighting has been happening in separate area of the city. That violence has been going on all week, and we have seen outbreaks of fire.

“Today we haven’t had reports of protesters being shot.”

Inspired by uprising across the Middle East and North Africa, demonstrators have been demanding since January an end to Saleh’s 33-year-long rule.

After backtracking on several occasions, Saleh finally signed the deal in Riyadh to hand over power to Abdrabuh Mansur Hadi, the vice-president.

Under the agreement, Saleh will retain the honorary title of president until new elections take place within 90 days.

Hadi will have to negotiate a power transfer with the opposition in return for a promise of immunity from prosecution for Saleh and his family.

The Associated Press news agency reported on Friday that opposition parties that signed the power-transfer deal had selected Mohammed Basindwa as prime minister.

The umbrella opposition group, Joint Meeting Parties, was a signatory to the Riyadh deal.

Under the deal’s terms, Hadi is expected to ask him in the next few days to form a national unity government.

Basindwa, though an independent, has held numerous positions in Saleh’s government, including foreign and information minister.

Speaking to Al Jazeera on Friday, Abdo al-Jandai, Yemen’s deputy minister of information, said the implementation of the power transfer had begun already.

“The vice-president is now having full powers and support by the president to implement the Gulf initiative,” he said.

“For sure, there are some demonstrations and protesters in the streets, which is against the initiative. They [opposition] need to talk to the people in the streets and stop what they are doing.”

Our special correspondent says some opposition members are backtracking, saying we are with the youth and we want to see Saleh on trial”.

“Right now, there is a bit of a confusion on who is and who is not supporting the deal,” our special correspondent said.

“These demonstrators are putting the parties that signed the deal in an awkward position.” 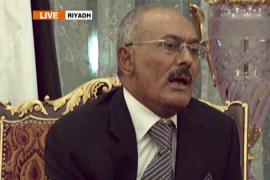 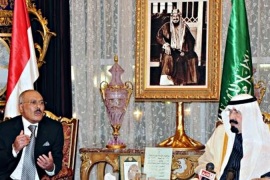 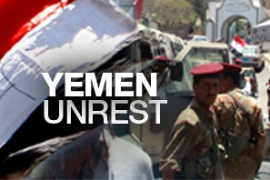 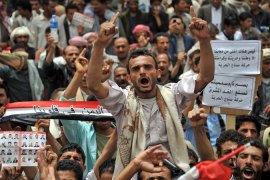