Egypt’s ruling military council has apologised for the deaths of demonstrators during six straight days of anti-military rallies, but has vowed to hold elections on time despite a push from activists and some political parties to postpone them.

The apology by the SCAF came amid a tense calm across the country following nearly a week of street battles that left 38 people dead and more than 3,000 wounded.

“The Supreme Council of the Armed Forces presents its regrets and deep apologies for the deaths of martyrs from among Egypt’s loyal sons during the recent events in Tahrir Square,” it said on Thursday in a statement on its Facebook page.

Al Jazeera’s Malika Bilal, reporting from Cairo, said “the army is out in relative force to enforce the peace … the centre of Tahrir Square is peaceful. Protesters have begun cleaning up”.

The army also called on “honourable citizens” to protect the square, separate the protesters from interior ministry riot police and arrest those who are found suspicious, raising concerns among some that the announcement had given license for street violence.

The SCAF’s announcement and increasing reports of arrests and violence against local and international journalists has created a tense atmosphere in Cairo, with protesters calling for another “million-man” march on Friday, a day when protest crowds in Egypt and elsewhere in the Middle East typically mass for major demonstrations.

The military also began asserting a firmer street presence on Thursday, promising to help police secure the country during the voting and erecting a two-metre-tall concrete barricade on Mohamed Mahmoud Street.

The street leads towards the interior ministry and has been the focal point of violence between riot police and crowds of young men.

Clashes between protesters and security forces first erupted on Saturday, days before the first phase of parliamentary elections scheduled to begin on Monday – casting the country’s political future into question.

But Mamdouh Shahin, a major-general on the military council, said in a news conference on Thursday that election plans would continue as planned.

Shahin also assured demonstrators that those responsible for killing or injuring protesters would be held accountable and that many detainees would be released as early as Saturday.

He did not, however, meet the protesters’ primary demand of immediately handing over power to a civilian authority.

Monday’s elections will be Egypt’s first vote since long-time ruler Hosni Mubarak was ousted from power in February by a popular uprising.

A temporary truce between security forces and protesters broke down on Wednesday night in and around Cairo’s Tahrir Square, the epicentre of public dissent.

Police from the interior ministry’s Central Security Forces appeared to fire an unprovoked barrage of tear gas at a large crowd gathered on Mohamed Mahmoud Street, witnesses said, despite the truce that had settled in after the arrival of army vehicles and religious scholars.

“Interior ministry forces are out of control … they’re not being professional and they’re not being controlled by the military council,” Rebab el-Mahdy, a politics professor at the American University in Cairo, told Al Jazeera.

Tantawi announced on state media that the military had no interest in staying in power and that parliamentary elections would go ahead. 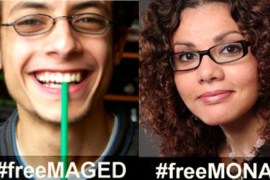 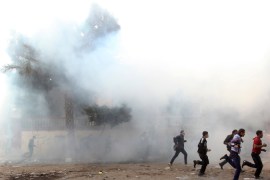 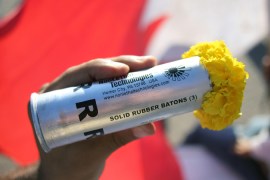