Activists in Egypt have called for a mass demonstration in Cairo, a day after the cabinet offered its resignation to the ruling military council following clashes that have left at least 33 people dead and hundreds injured.

Groups including the Coalition of Revolution Youth and the April 6 movement, which spearheaded the revolution that toppled Hosni Mubarak in February, called for a “million-man march” on Tuesday afternoon in Cairo’s central Tahrir Square to put pressure on the Supreme Council of the Armed Forces (SCAF) to cede power to civilian leaders.

Essam Sharaf, the interim prime minister, offered his cabinet’s resignation late on Monday, but a military official said the council was seeking agreement on a new prime minister before it would accept the resignation.

Sources said SCAF had approached Mohamed ElBaradei, the presidential hopeful and opposition politician, to form a new interim government. However, ElBaradei was said to be hesitating over assurances regarding his authority to choose cabinet ministers.

Field Marshal Hussein Tantawi, Mubarak’s defence minister of two decades and the head of SCAF, was scheduled to address the nation, according to Egypt’s state television.

The developments came as a funeral procession took place in Tahrir Square for a protester who was killed.

Al Jazeera’s Mike Hanna reporting from Tahrir Square, said: “Parading that dead body in the square is certainly something that is going to inflame emotions.”

Some 20,000 defiantly demonstrated in the public square overnight, but the protests have yet to attract the hundreds of thousands who toppled Mubarak in February.

By afternoon on Tuesday crowds were swelling in Tahrir Square.

Our correspondent said there was a massive Egyptian flag being carried by a few hundred protesters, many of whom were shouting anti-military slogans.

“The people want the fall of the marshal,” protesters chanted, referring to Tantawi.

“This land belongs to Egyptians. It is not for sale and does not need any guardians,” one banner read. “All Egyptians demand an Egypt run by civilians,” another said.

Dina Ahmed Hassan, 30, said she felt it was her obligation to come to Tahrir today to be among the million.

“I wanted to see the truth,” Hassan said. “We’re calling for an end to the violence against the Egyptian youth who don’t have any weapons at all”.

After expressing “deep regret for the victims in these painful incidents”, the ruling council appealed for calm late on Monday and called for crisis talks with political forces to find a way forward, as well as calling for a justice ministry investigation into the latest unrest.

The Muslim Brotherhood announced on Tuesday it would participate in talks aimed at ending the deadly clashes.

“The Supreme Council of the Armed Forces has called a meeting [for Tuesday] and we will participate,” said Saad al-Katatni, secretary-general of the Party of Freedom and Justice, the Brotherhood’s political wing.

“One major player not calling on its members to come to Tahrir Square today is the Muslim Brotherhood,” our correspondent reported on Monday.

“This is interesting because they’re the single largest political bloc.”

Many demonstrators, however, condemned the military’s call for the talks.

“They kill us and then say they want to investigate the incident. I want to understand how can they be party to the battle and at the same time be the arbitrator.”

Al Jazeera’s Jamal Elshayyal, reporting from Cairo, said many Egyptians had lost trust in Tantawi after the government “resumed military trials for civilians, torture and excessive use of force by the military”.

Elsewhere, some 5,000 people surrounded a security headquarters in the northern coastal city of Alexandria and police responded by firing live ammunition, witnesses said.

Security forces also battled about 4,000 demonstrators in the port city of Ismailia on the Suez Canal, witnesses said. 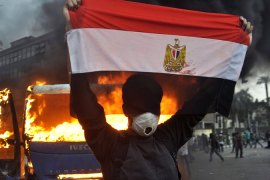 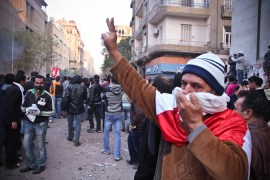 At least 33 are dead after a crackdown on demonstrations against military rule in Egypt. 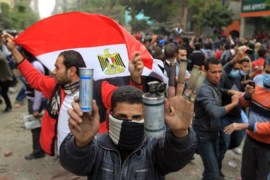