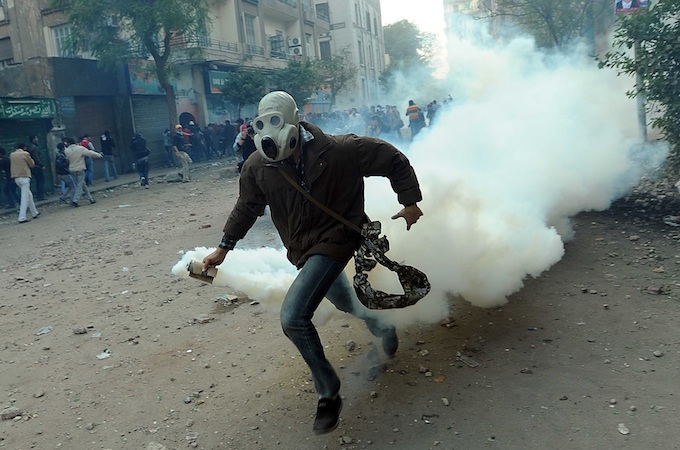 Many of Egypt’s political factions have now weighed in on the brutal crackdown against peaceful protesters gathered in Tahrir Square.

Reactions have been predictably varied. Youth movements and activists have pressed for substantial changes, with some demanding the removal of the Supreme Council of the Armed Forces (SCAF), Egypt’s ruling military council, and the creation of an interim civilian government.

On the other hand, Egypt’s formal political parties – particularly the well-organised Islamist parties, including the Muslim Brotherhood, and the Salafi Nour party – have issued far more cautious responses, for fear of disrupting the upcoming parliamentary elections, due to begin on November 28.

Several political actors, including the Revolution Continues alliance and parliamentary candidate Amr Hamzawy, announced that they were suspending their campaigns to protest the violence.

The Muslim Brotherhood – and its political arm, the Freedom and Justice Party – probably has the most to gain from next week’s parliamentary election. Most experts believe it will win a sizable plurality in parliament, if not an outright majority.

So the group’s response to the Tahrir violence has been a cautious one. In a statement posted on its web site, the Brotherhood “condemned the aggressive force used by the riot police, which is reminiscent of the former regime’s methods under the former Interior Minister Habib el Adly”.

“The party asserted that peaceful protesting is a legitimate right protected by the constitution as long as it is does not hinder daily life and destroy public and private property.”

But the Brotherhood did not call for SCAF to step down, and stressed that Egyptians should “work toward the upcoming parliamentary elections.” The statement went so far as to urge protesters to “demonstrate restraint,” to avoid “countering the revolution.”

Nader Omran, a member of the Freedom and Justice Party’s political committee, told Al Jazeera that the violence should not derail the vote.

The Brotherhood does seem to be under a bit of internal pressure over its cautious response: Mohamed Beltagy, a respected member of the group, acknowledged on Facebook that some Egyptians were angry with the Brotherhood’s distance from the protesters.

The Salafi Nour party posted a statement online which affirmed that Egyptians had the right to protest, and criticised the security forces for attacking peaceful demonstrators.

But it also echoes a few lines heard on state television, or from the interior ministry: It accused some of the protesters of trying to “create chaos” in Egypt, and blamed the media for sensationalised reporting. It also rejected any call to postpone the elections (and ended with a call for campaign contributions).

Hazem Abu Ismail, a presidential candidate, initially did not support a sit-in. He told supporters on Friday evening that it was “not appropriate” to remain in Tahrir Square overnight. By Sunday, he had changed his mind: “I tell you, do not leave the square. This square will lead the way from now on,” he told protesters.

Hours later, a shouting match reportedly broke out between liberal protesters and salafis who had entered the square. (And it was unclear whether Abu Ismail took his own advice: There are mixed reports on whether or not he stayed in Tahrir.)

The Free Egyptians, the liberal party founded by Naguib Sawiris, issued a statement about the violence on Saturday. It condemned the violence against the protesters, and also the “polarisation” which has plagued Egyptian politics since the revolution.

“The party calls for continuing toawrds national consensus on the constitutional principles,” the statement said, “in an effort to remove tensions.” The statement also stressed the importance of holding elections on time.

Sayed al-Badawy, the head of the Wafd Party, Egypt’s oldest liberal party, said in a statement that Egyptians should push SCAF to proceed with parliamentary elections.

His statement, much like the Nour party’s response, blamed some of the unrest on unnamed “enemies”.

“The scenes are being repeated like a nightmare seen at times in which the state was absent and thuggery prevailed instead of laws,” he said. “Egypt’s enemies, inside and outside, are trying to make the revolution fail, because they know its success means the start of a democratic transition. They know Egypt will become the most democratic country in the region.”

The April 6 youth movement, which played a leading role in sparking the revolution, issued a set of demands last night on its web site. The group called for an indefinite sit-in at Tahrir, and accused the military council of “wearing Mubarak’s mask.”

“The continued power of the military council is responsible for the deterioration of the situation, day after day,” the statement said.

April 6 demanded that SCAF fix a date for presidential elections, no later than April 2012; that Essam Sharaf resign as the interim prime minister, and his cabinet be dissolved; that a “national salvation government” assume power; and that the government launch an investigation into the violence in Tahrir Square.

The demand for a sit-in struck some Egyptians as a call to delay parliamentary elections, but a member of the group, Amr Osama, later told Al Jazeera that April 6 did not want the elections postponed.

The Maspero Youth Coalition, a Coptic activist group, issued a similar statement, according to the Egyptian daily Al-Ahram. “We support the demands of fellow political forces to form a new government, sack the Essam Sharaf government and hand over authority,” it said.

Mohamed ElBaradei appeared on a late-night talk show on Sunday to discuss the violence. ElBaradei blamed SCAF for the insecurity, according to a report in the Egyptian daily Al-Masry Al-Youm. “The prime responsibility for the situation of the country is the SCAF, who admitted they cannot run the country,” he said.

ElBaradei repeated his call for a “rescue cabinet,” an idea he and several other intellectuals proposed last week, before the latest round of violence in Tahrir.

Joining him on the show was Abdel Moneim Aboul Fotouh, a former official in the Muslim Brotherhood who broke with the movement’s leadership earlier this year. He said that SCAF worsened the situation with its proposed “supra-constitutional principles” document, which would have cemented the military’s privileged role in Egyptian politics.

The document was the focal point of Friday’s protest in Tahrir, the prelude to this weekend’s violence.

“They knew that this document would enrage different political forces. It was ill-advised, given that it came so close to the elections,” Aboul Fotouh said.

Amr Moussa, the former foreign minister and Arab League chief, issued a statement urging SCAF to fix a timetable for elections, with the presidential ballot no later than May 2012.