Tens of thousands of Islamist and secular protesters gathered in Cairo’s Tahrir Square and Alexandria on Friday for a mass rally to pressure the ruling military council to hand over power to a civilian government.

The demonstration, dubbed the “Friday of One Demand,” was called in response to a document of “supraconstitutional” principles floated by the government that declares the military the guardian of “constitutional legitimacy”, suggesting the armed forces could have the final word on major policies even after a civilian parliament and president are elected.

A wide spectrum of political groups including liberals and ultraconservative Islamists have decried the document even as they reportedly negotiate with the government to get it changed.

Though opposition to the military’s perceived power grab comes from all sides, Muslim religious movements are the most vocal. They fear that the document will push Egypt toward a more civil, secular state.

Yasir Hamida, a 40-year-old member of the Muslim Brotherhood, told Al Jazeera’s Malka Bilal that he had lived through the former regime and now wanted to “do something for our kids”.

“My demand is that the … document be cancelled. Enough. We are tired now. We thank the army, but it’s time to transfer power and let the parliament start organising a constitution and get ready for a civilian state,” he said. “I’m happy that all the coalitions are here today.”

Elections for the lower house of parliament, the People’s Assembly, begin on November 28 and will last until January, occurring in three stages. The upper house, or Shura Council, will be elected after that.

The ruling Supreme Council of the Armed Forces (SCAF), which assumed ultimate executive power after President Hosni Mubarak stepped down in February, initially promised a presidential election in early 2012 but has recently suggested it could occur as late as 2013. In the meantime, the SCAF will be able to propose and veto legislation, convene and adjourn parliament, and appoint the prime minister and cabinet.

Friday’s protest drew political parties and religious movements of different stripes, though the loudest voices in the square came from Islamists, including hardline Salafis and the comparatively moderate Muslim Brotherhood.

Liberal, leftist and Islamist parties and groups such as the April 6 Movement, founded in solidarity with labour protests, participated in the rally. Islamists joined with their call to put an end to military trials of civilians, which have led to the incarceration of thousands in proceedings described by human rights activists as opaque and unfair.

Anan Zuhairi, a 26-year-old doctor, told Bilal she was not with any party or political movement but that she joined the protest because “nothing has been resolved since the revolution”.

“Nothing we revolted for has happened. Emergency law is still not canceled. People are being taken out of their homes. Our demands have remained the same except they’ve become more,” she said. “We just want democracy and freedom. The people with opinions are all in prisons.”

The two main demands of the protesters were to prevent the imposition of the government’s document and to set a date for the presidential elections, Al Jazeera’s Sherine Tadros said.

“People are saying there has been no referendum on this document, and are asking why it is being imposed before the upcoming elections,” she said. “They see this as the military trying to impose their rule.”

“They are telling the military to stop trying to unilaterally control this transition period,” she said.

Though some parties had called for an extended sit-in, most of the crowd started to leave after the sun set and the weather began to turn cold, Tadros said, and the Muslim Brotherhood instructed its supporters to go home by 8pm.

Al Jazeera’s Jamal Elshayyal, in the northern coastal city of Alexandria, reported that thousands of people had also gathered there, “mainly heeding the call from the Salafists and the Muslim Brotherhood.”

After prayers, the crowd marched from mosques to a major military headquarters to protest the SCAF’s rule.

Protesters chanted “we do not want military rule” and “we must protect our revolution”.

The contested government document, written by Deputy Prime Minister Ali Selmi, includes clauses that remove the military’s budget from parliamentary oversight and allow the SCAF a final say on military-related matters. Selmi and the rest of the cabinet have been approved by the SCAF and ultimately answer to the military.

The government has revised the draft, but Islamists, who organised a mass protest in July against such a charter, have rejected the very idea of a document that would limit parliament’s authority to draft the constitution, branding the articles as undemocratic.

The Muslim Brotherhood, through its Freedom and Justice Party, may emerge as the largest bloc in the election. 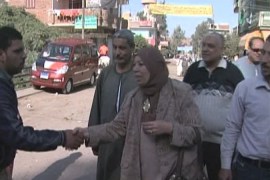 In the Nile Delta, winning a campaign is more about meeting people and promising solutions than ideology. 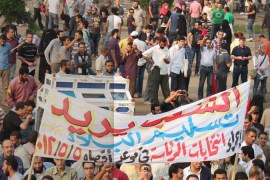 Timeline: Egypt’s revolution and beyond

Since the uprising began in January, Egypt has seen violence erupt, Mubarak resign and historic elections. 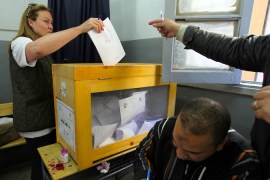 Explainer: Egypt goes to the polls

Our primer about Egypt’s electoral system, the parties and alliances, the history of recent elections and more. 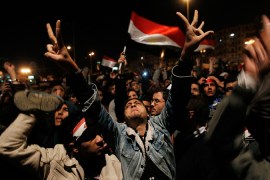 At least 40 parties and 6,000 candidates have registered to run, but will they deliver change or more of the same?