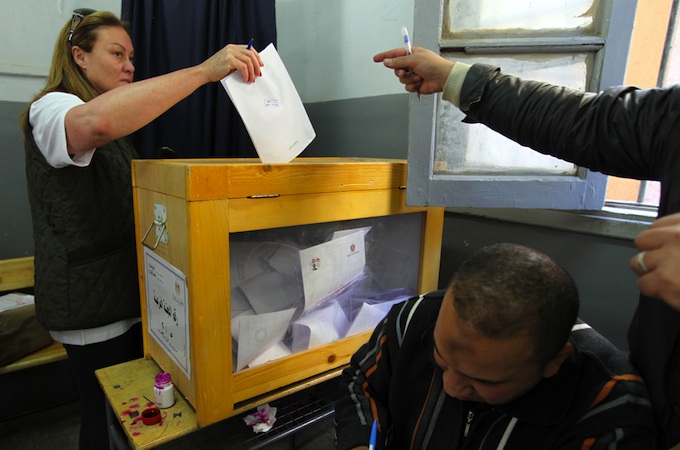 This is Egypt’s second vote since the revolution, following a constitutional referendum held in March [EPA]

Tens of millions of Egyptians will go to the polls, starting later this month, to take part in a bewilderingly complicated parliamentary election.

Voters will have more than 6,700 candidates to choose from. They represent 47 different political parties, many of which were only established in the nine months since Hosni Mubarak’s ouster. Some are grouped into constantly-shifting coalitions: The Muslim Brotherhood-led Democratic Alliance, for example, which contained more than 30 parties in September, now has just ten.

Egyptians will first elect candidates to the People’s Assembly, the lower house of parliament, a process which will take place during three rounds spaced out over six weeks. A subsequent three-round ballot will choose members of the upper house, the Shura Council.

And a presidential election will follow – in theory, at least – sometime in March or April, according to the Supreme Council of the Armed Forces (SCAF), Egypt’s ruling military junta.

Al Jazeera has prepared a series of explainers which outline how the election works, who’s running, the history of other recent elections and more. We’ve summarised each one below, with a link to the full story.

The People’s Assembly election will begin on November 28 when voters in nine governorates go to the polls. Subsequent rounds in other districts will follow on December 14 and January 3, with runoff ballots (as necessary) one week after each initial vote.

The Shura Council elections have similar rules, though 90 of the body’s 270 members are appointed by the president, not elected.

Half of the seats are reserved for “workers and farmers,” a quota which means winning candidates could be disqualified because of their profession.

Political activity in Egypt under the 30-year regime of Hosni Mubarak was very simple. A rotating cast of toothless opposition groups occasionally managed to win a handful of seats, but parliament was always controlled by Mubarak’s National Democratic Party, which never failed to win at least a two-thirds majority.

The uprising that overthrew Mubarak opened the floodgates to political participation. Since he stepped down in February, more than 40 parties and 6,000 candidates have reportedly registered to participate in what could be the first free and fair elections since a 30-year interlude of post-independence democracy ended with Gamel Abdel Nasser’s military coup in 1952.

Egypt’s new parties span the political spectrum from neo-liberals pushing for free trade and women’s rights to hardline Islamists who want to cut off the hands of thieves. There are moderate Muslims who insist Egypt should be a civil state, mystical Sufis who fear the rise of fundamentalist Salafis, and old-school socialists who want to nationalise industry and expand the already huge public sector.

Dozens of political parties and about 6,000 candidates are in the fray in Egypt’s upcoming parliamentary elections. They represent the diversity of Egypt’s wide political spectrum with their divergent backgrounds and ideals.

Some individuals crowding the political space, of course, are more famous than the others, including telecommunications mogul Naguib Sawiris, the founder of the Free Egyptians Party; Saad al-Katatni, the head of the Muslim Brotherhood’s new political party, the Freedom and Justice Party; and Amr Hamzawy, the head of the liberal Egypt Freedom Party.

The role of parliament

Its 498 members will serve five-year terms. They will draft laws, oversee the president’s ability to institute emergency law, and help to choose the 100-member council that will draft Egypt’s permanent post-revolutionary constitution.

Past elections in Egypt

Few elections in Hosni Mubarak-era Egypt were worth writing about: The “presidential ballot” was simply a yes-or-no referendum on Mubarak’s rule, decided with a 90 per cent margin, and the ruling National Democratic Party took sizable majorities in both houses of parliament.

Egypt’s first officially contested presidential election took place in 2005, though fraud and harassment (the leading opposition candidate was arrested months before the ballot) meant it was far from a competitive vote.

More significantly, the Muslim Brotherhood – or, more accurately, independent candidates affiliated with the Brotherhood, since the movement was officially banned – won more than 80 seats in parliament, an unprecedented show of opposition to the NDP.

The ruling party learned its lesson, and parliamentary elections in 2010 – dubbed the “most fraudulent in Egyptian history” by one human rights group – gave the NDP near-total dominance of the People’s Assembly.

The most recent election came in March, when more than 18 million Egyptians voted on a package of constitutional amendments; it was overwhelmingly approved, with 77 per cent voting in favour. Observers said the referendum was free of any major irregularities.

Why do these elections matter?

Why do the Egyptian parliamentary elections matter? In a word, SCAF.

Or, more specifically, taking power – at least some of it – from the ruling military party and putting it in the hands of a civilian government. Some doubt the new parliament will be able to check SCAF’s powers, but there is also the belief that the elections are an essential first step towards democracy (with a new constitution and president).