At least two men have been killed in a second day of clashes as fighters from Zawiya set up roablocks to prevent rivals from the nearby town of Wershefana entering their territory.

There are conflicting reports about what triggered the confrontation on Saturday near a military camp.

One local commander, amid the sound of gunfire, claimed to be fighting Gaddafi loyalists, but those claims were impossible to verify.

“We don’t have any problems with our brothers in the neighbourhood,” Ali al-Deeb told AP news agency, at a checkpoint on the main road where his men were stopping vehicles.

“We are fighting with the pro-Gaddafi followers. Gaddafi followers still exist and we’re still tracking them down and capturing them. We will clean the country of them.”

He told the Reuters news agency it was an attack of men from Zawiya who wanted control of the Imaya military base, and who had been misled by a rumour that Gaddafi loyalists were in the area.

The incoming prime minister, Abdurrahim El-Keib, has promised to disarm the country and set up a national army, but has yet to announce a concrete timetable or form a government.

The reports of the clashes came as production resumed at Italian energy company Eni’s largest oilfield in Libya, known a El Feel [Elephant] because of its size, according to Hussein Abuseliana, the field manager at the site.

Prior to the revolution, Eni pumped about 130,000 barrels per day, but daily production is currently limited to 40,000 barrels.

Abuseliana said on Saturday his team was working on getting power back up and running smoothly to increase production in Marzuq.

“We have restarted five wells,” he said.

Some equipment from El Feel, mainly from the control room, had gone missing during Libya’s war, Abuseliana said. 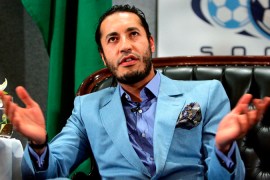 Saadi Gaddafi to be given refuge on humanitarian grounds, as he is sought in Libya for murder-related charges. 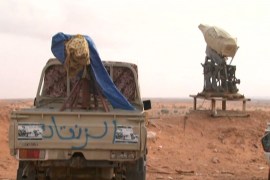