Both Sarkozy and Merkel underlined the need for Greece to implement the measures it had agreed to in return for the next instalment of an international loan, a statement from Sarkozy’s office said after Saturday’s talks.

“The payment of the next tranche [of the bailout] can only take place when a decisive step has been taken in this matter.”

In separate talks, the French and German leaders “reaffirmed their determination to totally defend the euro”, the statement said.

However, Germany’s Der Spiegel magazine, in a report due out on Monday, says the government had worked out contingency plans in the event that Greece had to quit the eurozone.

Merkel was prepared for the possibility that Greece’s new government refuses to carry out the tough austerity programme required of it in return for the next tranche of the EU-IMF bailout, it reported.

Greece’s new unity government faces a race against time to save the debt-stricken nation from bankruptcy after a landmark power-sharing deal struck between opposing political parties.

Daily newspaper Kathimerini has hailed the new cabinet – a power-sharing mix of Pasok socialists, New Democracy conservatives and far-right nationalist party Laos – as “a government of balance and agreement”.

But Greece’s financial daily Naftemporiki reminded the new government that its priority was “stabilising of the economy in difficult conditions, both at home and in the eurozone”.

Evangelos Venizelos, the Greek finance minister, who kept his job, said on Friday he hoped the latest slice of the bailout agreed for Greece would be paid soon after another EU finance ministers meeting on November 17.

First though, the Greeks have to implement the measures agreed at the EU summit in Brussels on October 26-27.

Venizelos said this was “urgent” and would be done “no later than Monday or Tuesday”.

As part of the deal, private banks are to accept writedowns of 50 per cent, which will allow Greece to wipe out nearly a third of its $480bn debt.

The procedure to confirm the new government – which was voted in with a comfortable 254 out of 300 cross-party votes – in parliament will begin on Monday with a vote of confidence, expected on Wednesday.

It must then implement the unpopular austerity measures exacted as the price for a second EU rescue package of $135bn in loans, the same amount in debt reduction and a further $40bn in guarantees.

Greece will also have to manage a delicate power-sharing deal and enact reforms quickly to appease public resentment.

“The government will have to be very quick on economic issues,” Ilias Nicolakopoulos, a political analyst, told the AFP news agency.

“We will have a 2012 budget vote before the end of December as well as the Brussels plan of 26-27 October.”

The strikes that started under Papandreou were set to continue as the main public service union Adedy called for three-hour stoppages, starting on Tuesday, in protest at rising taxes and 30,000 job cuts across the civil service.

Demonstrations were expected on Thursday, November 17, a date laden with significance in Greece; it marks the anniversary of huge protests in 1973 by students at the Athens Polytechnic University against the then junta.

Both refused to join the new coalition, opposing what they termed Greek complicity with the International Monetary Fund and the EU-led policy that obliges Greece to impose austerity measures.

The European Commission forecasts a 2.8 per cent contraction for the Greek economy in 2012 and a further increase in unemployment, measured at 18 per cent in August. 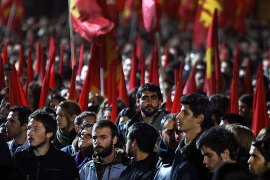 Key events since George Papandreou first sealed a bailout deal for Greece in May 2010. 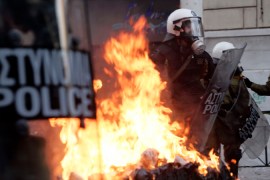 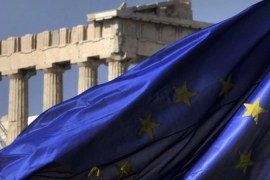