The Arab League has come under mounting pressure to suspend Syria’s membership as it meets to discuss the country’s steadily worsening eight month crisis.

More than 250 Syrian civilians have been killed in the past 11 days as the conflict takes a dangerous turn.

The regional bloc faces calls, from within its ranks and from European countries, to act as its 22 member states meet in the Egyptian capital, Cairo, on Saturday after an earlier deal with Syria failed to achieve an end to the violence in that country.

Al Jazeera’s Jane Arraf, reporting from Cairo, said: “There is a little bit of optimism if only because the situation is getting more and more desperate.”

Khaled al-Habbas, adviser to the secretary-general of the Arab League, told our correspondent “that indeed freezing Syria’s membership is one of the options, but certainly not the only option.”

Under an Arab League plan agreed on November 2, Syria pledged to pull the military out of flashpoint cities, free political prisoners and start talks with the opposition.

However, since then, security forces have killed more than 100 people in the central city of Homs, the Washington-based Human Rights Watch (HRW) said in a report issued on Friday.

The UN said, meanwhile, that the government’s repression has left more than 3,500 people dead since protests against the rule of Bashar al-Assad, the Syrian president, erupted in mid-March.

Saudi Arabia leads a group of Arabian Gulf states including Qatar, Oman and Bahrain that are ready to increase the pressure on Assad, an ally of their rival Iran, on Saturday at the Arab League’s headquarters in Cairo.

Diplomats say they are opposed by countries such as Yemen – in the grip of its own uprising; Lebanon, where
Syria’s influence looms large; and Algeria, seen as more sympathetic to Assad and nervous about the message any intervention in Syria would send to its own population.

In its report, HRW accused the Syrian government of committing “crimes against humanity” amid reports of dozens of new deaths at the hands of the country’s security forces over the past two days.

HRW urged the Arab League to suspend Syria’s membership, and called on the body to ask the UN Security Council to impose an arms embargo and sanctions against responsible individuals.

It also called for the group to refer Syria to the International Criminal Court (ICC), saying former detainees reported torture including security forces’ use of heated metal rods, electric shocks and stress positions.

“The systematic nature of abuses against civilians in Homs by Syrian government forces, including torture and unlawful killings, indicate that crimes against humanity have been committed,” HRW said in its 63-page report.

Based on the accounts of 110 victims and witnesses, the report said “violations by the Syrian security forces killed at least 587 civilians” in Homs and its province between mid-April and the end of August.

In their latest assault on the city, it said the forces had killed at least another 104 people since last Wednesday, the day that Assad’s government agreed to an Arab League initiative to end the violence.

On Friday, at least 37 people were killed across the country, activists told Al Jazeera, as regular weekly anti-government protests got under way.

The HRW report said protesters were unarmed in most clashes, but that defectors from the security forces intervened when the demonstrators came under fire from government troops and armed men.

It said, however, that “these incidents by no means justify the disproportionate and systematic use of lethal force against demonstrators”.

HRW said the Syrian government’s strategy had provoked some protesters and defectors to arm themselves and fight back.

It said this “highlights the need for the international community to ensure an immediate cessation of lethal force lest the country slip into bloodier conflict”.

Video footage that emerged online, reportedly shot in Homs on Sunday, has added to claims that opposition groups are arming themselves in the fight against the security forces of Assad.

“[The conflict] is moving into a new phase where we are seeing more armed people on the streets of Syrian cities,” Al Jazeera’s Rula Amin reported from Beirut in neighbouring Lebanon, as most media are barred from reporting within Syria.

“The opposition attributes these armed groups to defectors from the army … They say most of the protests are peaceful and the defectors now are carrying their guns in order to protect and defend the civilian population.

“But definitely the crackdown by the government has instigated more people carrying more arms against the security forces,” she said.

Activists said security forces conducted raids in search of dissidents in areas including the capital Damascus, Deir al-Zur, Idlib, Hama and Homs – a city has emerged as the epicentre of the uprising.

An eight-year-old girl was among the victims in Homs, Rami Abdul-Rahman, head of the British-based Syrian Observatory for Human Rights, said.

There were reports of deadly clashes between army defectors and soldiers near the eastern city of Deir al-Zour and near Maarat al-Numan, a town on the highway linking Damascus and the city of Aleppo.

Navi Pillay, the UN human rights chief, told the Security Council on Wednesday that an increasing number of Syrian soldiers are defecting, raising the risk of a Libya-style civil war.

“Where basic human rights are trampled and peaceful demands for change met by brutal violence, people are eventually compelled to have recourse to rebellion against tyranny and oppression,” she said. 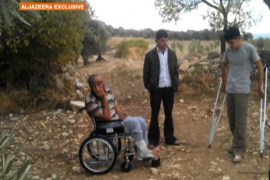 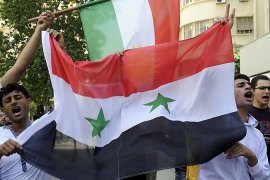