Otto Perez Molina, a retired general from the right-wing Patriot Party who promises hard stance against spiralling violence has won a runoff presidential election with 55 per cent of the vote.

Perez had a comfortable lead over his runoff rival, the populist businessman Manuel Baldizon, who won 45 per cent.

“For all the Guatemalans who have put their trust in me, I thank you very much. To those Guatemalans who did not vote for Otto Perez, I make a call to unite and to work together in the next four years, leaving aside party colours,” Perez said in a radio broadcast.

Perez – who has pledged to tackle Guatemala’s extreme violence and poverty – will succeed President Alvaro Colom, who is limited to a single term in office.

Colom managed to break a half-century of domination by the hard right in Guatemala, but struggled to reform the Central American nation with limited means and a fragile majority.

Turnout in some regions of the country was about half of what it was for the initial presidential vote on September 11, according to analyst Oscar Almengor, who led a team of observers from the University of San Carlos of Guatemala.

Perez won most of the votes in the September 11 elections, but without the required outright majority for a first-round victory.

“The polling methods are inadequate,” Edgar Gutierrez, a former foreign minister who now runs a think-tank in Guatemala, said. “They’ve failed to [gauge] how between 25 and 30 per cent of the people intend to vote.”

Baldizon, a tycoon-turned-political populist, who barely registered in the polls when campaigning began six months ago but has since risen dramatically, has made many promises, including taking Guatemala’s football team to the World Cup.

While the football pledge was considered outlandish by some voters, other promises are appealing in a country with rampant poverty and crime. Baldizon has promised workers an extra month’s salary a year and that he will reinstate the death penalty and televise executions.

More than half of Guatemala’s 14 million people live in poverty and the country is plagued by organised crime and Mexican drug cartels.

Colom has had to send troops to retake some provinces from the Zetas drug gang, including Baldizon’s home state of Peten bordering Mexico.

Gang and cartel violence have followed the legacy of Guatemala’s 1960-1996 civil war in which the army, police and paramilitary are blamed for killing the vast majority of 200,000 – most of whom were Mayan.

Perez would be the first former military leader elected president in the country’s 25 years after the end of military rule.

While that concerns some international groups, Guatemala has a young population and many do not remember the war.

Witnesses say hundreds of villages were obliterated by the army’s scorched-earth policy.

Perez has said there were no massacres or genocide. He has never been charged with any atrocities and was one of the army’s chief representatives in negotiating the 1996 peace accords. 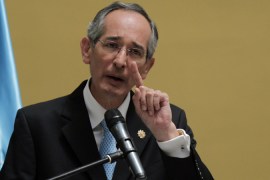 President “requests the forgiveness” of the family of Jacobo Arbenz, a leftist who was violently removed from power. 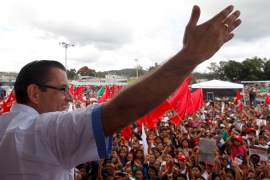 Crime a key issue for voters in Central American nation with one of the world’s highest murder rates. 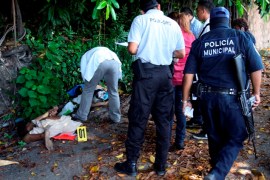 Mexico’s bloody crackdown on drug gangs has claimed thousands of lives and affected region along the border with US. 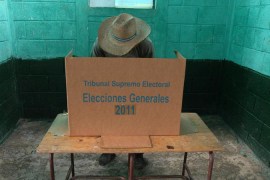 Retired general Otto Perez Molina receives most support, but fails to win 50 per cent of votes required for victory.