German and French leaders have told Greece it will not receive any more bailout funds until it decides whether it wants to stay in the eurozone.

Angela Merkel and Nicolas Sarkozy also stressed that saving the euro was ultimately more important to them than rescuing Greece.

“Our Greek friends must decide whether they want to continue the journey with us,” Sarkozy, who said last week that it was a “mistake” to allow Greece into the eurozone, told a news conference in the French southern resort of Cannes.

George Papandreou, the Greek prime minister, sparked fears and panic on financial markets by announcing on Monday that Greece would hold a referendum, tentantively on December 4, on a second bailout plan negotiated with eurozone leaders last week.

But Papandreou is facing opposition from his finance minister, Evangelos Venizelos, who said on Thursday he was against the referendum.

Venizelos, who accompanied the premier to Cannes for a meeting with European officials, said Greece’s position within the euro was a “historic conquest” and that it “cannot be put in doubt” and “cannot depend on a referendum”.

A legislator from the ruling party also joined the chorus of party members urging Papandreou to withdraw his plan for the referendum.

Germany’s Merkel told the Cannes news conference the stabilisation of the euro could be better achieved “with Greece than without Greece”, but added that stabilising the currency was more important.

The news conference was held after the two leaders met Papandreou, who was summoned to meet them in the resort on the sidelines of a G20 summit.

The move cames as Italy’s financial stability panel said some Italian banks were having difficulty raising money on international
markets.

Beijing, he added, could not consider investing more in the euro zone’s bailout fund given the lack of detail on proposals
to leverage it.

“It has to be depended mainly on Europe to resolve the European debt problem,” Hu told Sarkozy in Cannes ahead of the G20 leaders meeting on Thursday and Friday, the official Xinhua news agency said. 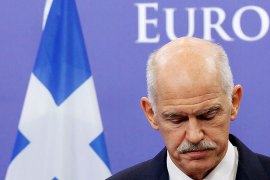 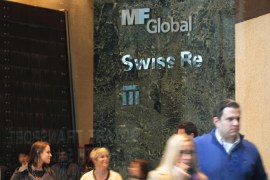