Fighters of Libya’s interim government are continuing their latest assault in the battle for Sirte, the hometown of former Libyan leader Muammar Gaddafi.

Anti-Gaddafi forces have surrounded Sirte and bombarded the city on Saturday with artillery shells fired from hundreds of vehicles carrying rocket launchers.

“This is proving to be a very difficult battle,” she said.

According to doctors, at least 22 people have been killed and 500 others wounded since anti-Gaddafi fighters began the “final push” operation on Friday.

Visibility is low due to an ongoing sandstorm, and National Transitional Council (NTC) forces were met with heavy sniper fire from Gaddafi’s troops, delaying the prospect of ending a three-week standoff.

Mauritanian mercenaries loyal to Gaddafi are believed to be holed up in the neighbourhood of Giza and the Ouagadougou conference hall, where the toppled leader used to receive world leaders.

Thousands of Sirte’s residents have fled over the past three weeks of battles in and around the coastal city.

Our correspondent spotted a few families managing to escape on Saturday, but she said it was difficult to tell how many more civilians were trapped inside the city as a result of the fighting.

Sirte residents who oppose Gaddafi said his loyalists were preventing residents from leaving the town despite the lack of food, water and electricity, Khodr said.

International organisations which were allowed into the embattled town to visit the hospitals said conditions were “dire”, with patients sitting in corridors of buildings that get shelled, she said.

Mustafa Abdul-Jalil, the head of the National Transitional Council, called on the international community to help treat the wounded in Sirte, saying they could deduct the cost from Libyan assets that were frozen under Gaddafi’s regime.

He held a news conference in Tripoli with British Defence Minister Liam Fox and his Italian counterpart, Ignazio La Russa, the latest in a string of foreign dignitaries to visit the country.

Fox pledged to keep up NATO airstrikes even after Sirte’s fall, saying the international military action would continue as long as the remnants of the regime pose a risk to the people of Libya.

“We have a message for those who are still fighting for Gaddafi that the game is over, you have been rejected by the people of Libya,” he said.

Gaddafi forces remain entrenched in the central city of Bani Walid, but the transitional leaders say they will declare liberation without it because Sirte’s fall will give them control over all seaports and harbours.

Sirte has served as Libya’s second capital and as Gaddafi’s political bastion, because of his birth ties to the city.

During his rule, Gaddafi showed much generosity to Sirte’s residents, offering jobs and other financial incentives.

Since the fall of his regime, residents have openly blamed NATO and anti-Gaddafi fighters for the country’s instability, and demanded Gaddafi’s return.

They have also questioned the possibility for national reconciliation and expressed scepticism at whether the NTC fighters will lay their arms down, rather than becoming embroiled in political infighting.

“There is a lot of reconciliation that [NTC forces] have to deal with and they can’t do that until they are able to free Sirte and start the process,” our correspondent said.

“This is a city where Gaddafi enjoys loyalty and this will be the test for national reconciliation.” 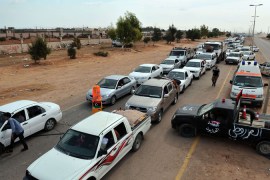 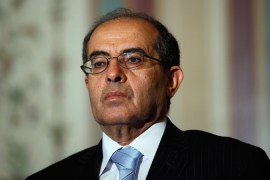