A statement released on Wednesday by Bahrain’s government appeared to nullify the verdicts issued earlier this week by a special security court against the doctors and nurses, who received sentences ranging from five to 15 years.

Lawyers for the Bahraini medics earlier denounced the convictions, saying they had found that “the most essential elements for a fair trial were not available in this trial”.

According to the lawyers, the medics were tried in a military court, despite being civilians.

“Despite the cessation of the state of emergency, the military trial continued for the medics, which was in breach of their constitutional rights which states that they must be tried in a civilian court as opposed to a military court.”

The lawyers were denied access to the medics by the military court as well as prevented from attending interrogations, they said.

Furthermore, the medics were subjected to torture during their detention, including beatings, solitary confinement, sleep deprivation, prevention of communication with others, and sexual harrassment, the lawyers said.

Other violations included denying the lawyers the right to meet or visit their clients before the start of the trial, and the court’s refusal to investigate claims of torture.

In a statement, Ali Alboainain, the attorney general, said that after studying the cases the department of public prosecutions had “determined that the cases should be retried before the ordinary courts”.

Alboainain added that the retrial “will be conducted before the highest civil court in Bahrain … the Department of Public Prosecutions seeks to establish the truth and to enforce the law, while protecting the rights of the accused,” Bahrain’s state news agency reported.

“No doctors or other medical personnel may be punished by reason of the fulfillment of their humanitarian duties or their political views,” he said.

However, Matar Matar an opposition MP in Bahrain, told Al Jazeera that there is confusion over what the ‘retrial’ actually entails, saying that it will not be a completely fresh trial, but rather an appeal.

“In fact they are not going to start again the trial, but rather it will be shifted to the civil court at the appeal level,” he said in a telephone interview. “There was a positive political message that the appeal came from the general prosecutor himself [attorney general]. He asked for the review, not the lawyers.”

“This gives us an indication that the judicial system wants to send a message that ‘we want to review’.”

Said Boumedouha, a researcher on Bahrain for Amnesty International, told Al Jazeera that the Bahraini king had issued a royal decree in August stating any criminal case tried in the National Safety Court – the military court – could be appealed in a civilian court, “this was what was going to happen [with these cases] anyway on the 23 October,” he said. “The only confusion now is when the public prosecutor today said they will have a full retrial.”

“Does this mean that the courts will re-evaluate the whole evidence? Does it mean that it will listen to all the defendants? Will it dismiss all the confessions obtained under duress, under torture? Can the lawyers bring in new witnesses?” he said, adding that these are all questions which will likely go unanswered until the trial starts again.

A further 19 people were sentenced to prison on Wednesday, including a 16-year-old Iraqi football player, for trying to burn down a police station during anti-government protests earlier this year, according to state media.

The detention of the Iraqi teenager, Zulfiqar Naji, sparked angry demonstrations in Iraq and as far away as Canada by people calling for his release.

It also prompted the Iraqi government to make a plea to Bahrain on his behalf. Naji played for a local football club in Bahrain until his arrest.

The player’s father, Abdulameer Naji, said in July that his son was taken into custody from their Bahrain home in April on suspicion of participating in protests.

The father has since fled to Iraq, but the boy’s mother and several of his siblings have remained in Bahrain.

Thirteen of the men were sentenced to five years in prison, while six were jailed for one year, taking to almost 80 the number of opposition figures and protesters jailed in recent days for their involvement in Shia-led protests in February and March against the Gulf island’s Sunni rulers.

Bahrain quashed the protests in March, helped by troops from Saudi Arabia and other Gulf Co-operation Council nations. 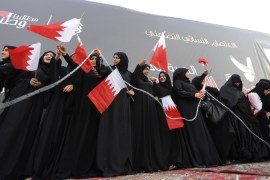 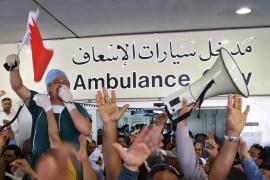 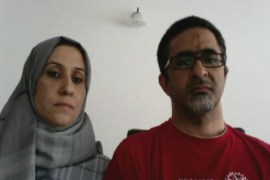 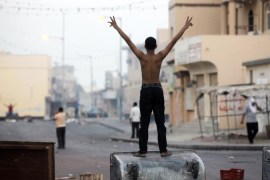