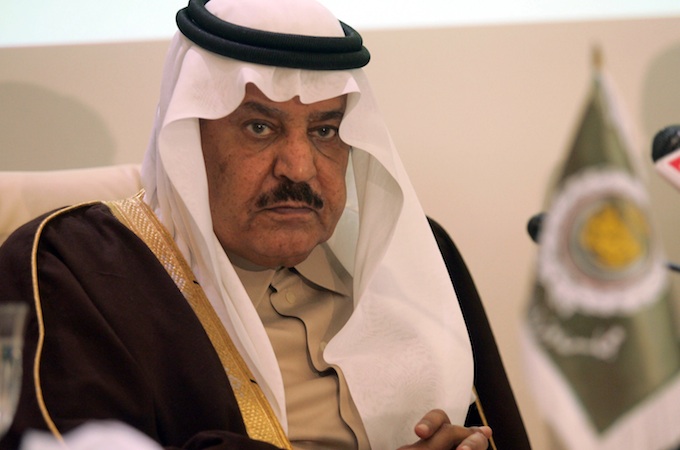 Nayef’s security services have targeted not just security threats, but political opponents of the House of Saud [EPA]

At the time, the group had begun to agitate for modest political reforms in the kingdom, including calling for the creation of a constitutional monarchy. Then-Crown Prince Abdullah, the country’s de facto ruler, was willing to entertain their demands in a series of “dialogues” with the reformists.

Nayef’s response was less accommodating. “What we won by the sword, we will keep by the sword,” he said, according to participants in the 2003 meeting.

True to his word, within a year, several leaders of the reform movement, including academics Abdullah al-Hamid and Matrouk al-Faleh, had been arrested for their activities.

Over the years, the septuagenarian Saudi royal has earned a reputation as a traditionalist who is opposed to changes in the country’s power structure. On Thursday, he was named the new crown prince.

Nayef, who was born in Taif, in western Saudi Arabia, in 1934, was appointed governor of Riyadh when he was barely 20 years old, and held briefly before entering the interior ministry. After a stint as deputy, he was elevated to interior minister in 1975, when his brother Fahd left the post to become crown prince.

Nayef is generally described as a “conservative,” often in opposition to Abdullah. His work as interior minister has focused on stamping out what he perceived as threats to Saudi Arabia’s stability. He controls security services that employ more than 130,000 people.

“Nayef’s power base is among the Islamists and the security services, which he uses to leverage himself against the other royals,” said Toby Craig Jones, a professor at Rutgers University who has written extensively on Saudi Arabia. “He has gone on the record as being ambivalent about elections, about political reform.”

Nayef is popular with some Western government for efforts to combat al-Qaeda. His son, Muhammad bin Nayef, the deputy interior minister for counterterrorism, was targeted by a suicide bomber in 2009.

But he also reportedly considers political reformists a threat. Many leaders of the 2003 reform movement have been repeatedly detained. More recently, security services under Nayef’s control arrested women who defied the country’s ban on female drivers, and cracked down on Shia protests in eastern Saudi Arabia.

Nayef has strong support among Saudi Arabia’s Wahhabi clerics. But he is said to have little sympathy for political Islamist groups, like the Muslim Brotherhood, which he views as a threat to the ruling family’s grip on power.

Although Sultan, who died on New York on Saturday, was nominally in charge of the “Yemen file”, both Nayef and his son played a major role in shaping Saudi policy towards its southern neighbour.

Earlier this year, they reportedly assumed control over Saudi Arabia’s patronage network in Yemen, through which the kingdom distributes payments to favoured tribal elders and politicians.

Diplomats in Riyadh say Nayef has described education as the key to Saudi Arabia’s future, echoing a line from Abdullah. They said he has said little about political reforms, women’s rights or other contentious issues.

In the run-up to Saudi Arabia’s 2005 municipal elections, it was Nayef who decided that women should not be allowed to vote.

Scholars say he may pursue policies that expand his base of support within security services and Islamist groups.

An October 2009 diplomatic cable from the US embassy in Riyadh, obtained by WikiLeaks, described Nayef as a “a conservative pragmatist convinced that security and stability are imperative.”

It went on to describe him as “elusive, ambiguous, pragmatic, unimaginative, shrewd and outspoken.”