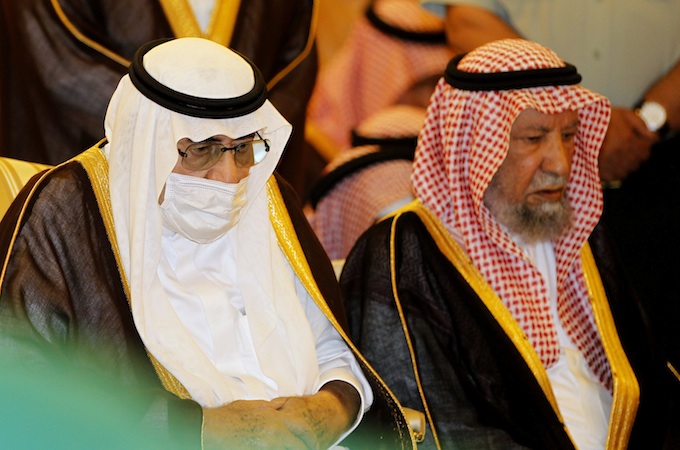 King Abdullah, who attended the funeral in a wheelchair, will decide on Sultan’s successor in the coming days [Reuters]

The funeral of Sultan bin Abdulaziz Al Saud, Saudi Arabia’s crown prince, has taken place in Riyadh, touching off what is likely to be the first of several major changes in the country’s line of succession over the next few years.

Hundreds of foreign dignitaries attended Tuesday’s ceremonies, which began shortly before afternoon prayers. Sultan died on Saturday at the age of 86 while receiving medical treatment in the United States, according to a statement released by the Saudi state press agency.

Sultan’s sons and brothers carried his corpse, covered in a brown shroud, through a throng of mourners in Riyadh’s Imam Turki bin Abdullah mosque. He was buried in Al-Oud cemetery, the final resting place of numerous other Saudi royals.

King Abdullah, the country’s ailing monarch, attended the funeral in a wheelchair. The heads of several neighbouring Gulf states, including Kuwait, Bahrain and Qatar, were also in attendance in Riyadh.

Also in attendance was Ali Akbar Salehi, the Iranian foreign minister, who headed his country’s delegation. Relations between the two countries seem to have soured this month, at least in public, after the United States arrested two Iranian men and charged them with plotting to kill the Saudi ambassador in Washington.

Joseph Biden, the US vice president, was to head an American delegation to Riyadh, which the White House said would arrive later in the week; non-Muslim delegations were requested to attend later in the official three-day mourning period.

Sultan, the longtime defence minister, was widely credited with helping to modernise Saudi Arabia’s armed forces; he was also accused of corruption in his dealings with foreign arms suppliers, charges the royal family denied.

The decision about Sultan’s successor is nominally made by an “allegiance council,” established by Abdullah in 2006; in practice, though, it is an ambiguous institution, and the king has the final say over the decision.

The line of succession

Crown Prince Sultan: Died on Saturday at the age of 86.

Nayef is generally described as a “conservative,” often in opposition to Abdullah, suggesting that the country’s aging monarch is a reform-minded liberal. An October 2009 diplomatic cable from the US embassy in Riyadh, obtained by WikiLeaks, described Nayef as a “hard-line conservative” who has been “lukewarm” to Abdullah’s (extremely limited) reform efforts.

But neither label is terribly instructive in the context of Saudi politics. Nayef is perhaps better understood through his work as interior minister, which has focused on stamping out what he perceives as threats to Saudi Arabia’s stability. He controls a sprawling security service which employs more than 130,000 people, giving him a powerful constituency.

“Nayef’s power base is among the Islamists and the security services, which he uses to leverage himself against the other royals,” said Toby Craig Jones, a professor at Rutgers University who has written extensively on Saudi Arabia. “He has gone on the record as being ambivalent about elections, about political reform.”

Nayef is popular in the West for efforts to combat Al Qaeda; his son Muhammad bin Nayef, the deputy interior minister for counterterrorism, was targeted by a suicide bomber in 2009.

But he also considers political reformists a threat. In 2003, when a small group of activists pushed for limited reforms – including a constitutional monarchy – Nayef had several of them arrested. Leaders of that movement, including academics Abdullah al-Hamid and Matrouk al-Faleh, have been detained several times since for their political activism.

Nayef has strong support among Saudi Arabia’s Wahhabi clerics. But he has little sympathy for political Islamist groups, like the Muslim Brotherhood, which he views as yet another threat to the ruling family’s grip on power.

Several other high-level appointments will be made in the coming days and weeks. A new defence minister will have to be found; and if Nayef is elevated to crown prince, he will likely step down from his post as interior minister.

The question of succession will be decided by the “allegiance council,” which includes dozens of princes

“Over a period of several days, perhaps weeks, we’re going to see several senior appointments. It’s a very unsettling time for the kingdom,” said Joseph Kechichian, a scholar who writes about Gulf politics.

Then there are longer-term questions of succession: Nayef is 78 years old, and he has reportedly faced medical problems of his own, though (as with all Saudi royals) reliable information about his health is scarce. Prince Salman, generally considered next in line after Nayef, is 75.

All are members of the so-called “Sudairi Seven,” a powerful alliance of Saudi royals named after their mother, Princess Hissa al-Sudairi. Al-Sudairi was one of the wives of King Abdulaziz al-Saud, the founder of modern Saudi Arabia.

“The population perceive that this is an ailing, aging regime, and that makes them uncertain,” said Mai Yamani, an analyst and the daughter of a former Saudi oil minister. “Nothing really guarantees for the people a transition to a younger prince, or even a more effective ruler for Saudi Arabia.”

For now, the king will likely opt for the status quo, with Nayef as crown prince and Salman as third in line. Jones said the royal family would likely try to postpone any decisions about the longer-term order of succession.

“They’re risk-averse. They’re going to make decisions about the medium-term which are least likely to create political turmoil,” he said. “This family protects itself.”