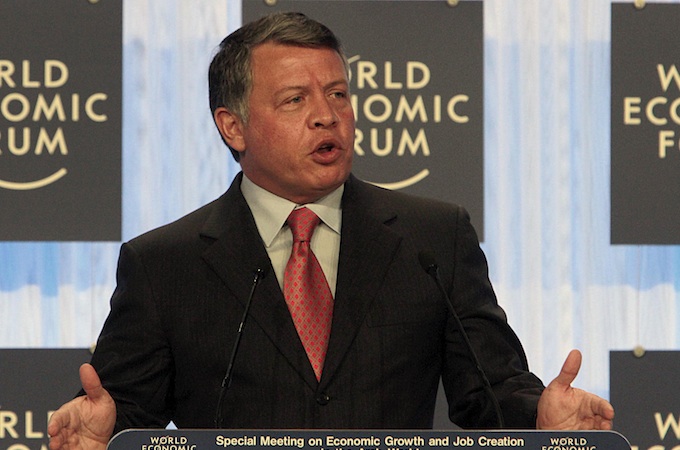 Jordan’s king has sworn in a new cabinet, including a new finance minister tasked with putting a cap on the country’s widening budget deficit.

The new cabinet was installed one week after King Abdullah II sacked ex-prime minister Marouf al-Bakhit and replaced him with Awn Khasawneh, a judge on the International Court of Justice in The Hague.

“The government will coordinate with all political powers and civil society groups in Jordan to prepare laws that govern political life and ensure democracy, justice, transparency and integrity,” Khasawneh wrote in a letter to the king.

Jordan has an official budget deficit of more than $1.4bn, more than 5 per cent of the country’s gross domestic product. The actual figure is much higher, particularly after the government announced $824m in new social spending in August. Unemployment is also high, at least 13 per cent, according to official statistics.

Abdullah tried to address those economic concerns in a speech on Saturday at a World Economic Forum meeting in Jordan.

“This year’s events have opened the way to positive change, but in many places, also created painful economic dislocations,” Abdullah said. “Strategies are urgently needed.”

But recent Jordanian governments have offered little in the way of new strategy. Al-Bakhit was deeply unpopular because of corruption, including a controversial casino deal in which he was involved, and because he passed few major reforms.

Most of the ministers appointed on Monday are new, although Nasser Judeh, the foreign minister, kept his job.

Khasawneh’s appointment was met with a positive reaction in Jordan, where he is seen as a political outsider who has remained untainted by the country’s widespread political corruption. Thousands demonstrated in Amman last week in support of his appointment, calling him “The Reformer”.

Oraib al-Rantawi, the head of the Al-Quds Centre for Political Studies in Amman, said Khasawneh must quickly deliver on the issue of political change.

“It’s a challenging issue because now he’ll be in Amman, in the fourth circle, not in The Hague,” al-Rantawi said, referring to the site of the prime minister’s office. “So will he be adjusting the system, or will be become part of the system?”

The cabinet does not include any members of the Islamic Action Front (IAF), Jordan’s main opposition party and a branch of the Muslim Brotherhood. The group’s leader, Hammam Saeed, wrote to Khasawneh and said this was not the time to join the cabinet, a position echoed on Monday by a spokesman for the group.

“Conditions aren’t ripe for the Muslim Brotherhood to join the government,” said Jamil Abu Baker. “The reform agenda does not match our aspirations and demands.”

Hamza Mansour, an IAF member, said the group would only join an elected cabinet, according to the Associated Press. Analysts said the group was reluctant to link itself too closely to the cabinet.