The UN has called for an international investigation into the death of Muammar Gaddafi, the deposed Libyan leader, saying it could have been a war crime.

Christof Heyns, the UN Special Rapporteur on extrajudicial, summary or arbitrary executions, told Al Jazeera on Friday that a proper investigation into the exact events surrounding Gaddafi’s death was a key test for Libya’s future as a democratic and accountable state.

“The Geneva conventions are very clear that when prisoners are taken they may not be executed willfully and if that was the case then we are dealing with a war crime, something that should be tried.”

“It’s important that the new government will be placed on a solid basis where there is accountability for illegal actions.  I think it would be good if there was international investigation into this as well, and it’s not simply Mr Gaddafi  but also there’s the dangers of reprisals against others as well and that is where it is important to draw the line to say that  new system in place one of  accountability.”

Libya’s National Transitional Council delayed Gaddafi’s burial on Firday in order to arrange a secret location and allow for an investigation into his death, officials said.

Mohamed Sayeh, a senior member of the NTC, told the Associated Press news agency that a “third party will come from outside of Libya to go through the paperwork” relating to Gaddafi’s death.

In the hours after Gaddafi’s capture, NTC officials and fighters gave different accounts of what happened, but several videos taken by fighters at the scene showed him being taken alive, though bleeding from the left side of his head.

In the videos, fighters shout, scream and fire their weapons in the air.

Some can be seen punching Gaddafi and pulling his head down by his hair.

Gaddafi, appearing dazed, gestures to them and touches his wound, then displays his bloody hand.

No videos have emerged showing the moment of Gaddafi’s death, and it is unclear exactly how he received his mortal wound.

The first video, received by Al Jazeera, showed his lifeless body lying on the pavement.

An international commission of inquiry launched by the UN Human Rights Council is already investigating killings, torture and other crimes in Libya, and Colville, the UN human rights office spokesman, said he expected that panel would look into Gaddafi’s death.

“It is a fundamental principle of international law that people accused of serious crimes should if possible be tried,” he said. “Summary executions are strictly illegal. It is different if someone is killed in combat.”

According to some reports from Sirte, Gaddafi and an escort of bodyguards had attempted to break out of the siege of the city, which had lasted for more than a month.

Their convoy was struck by French fighter jets and a US Predator drone, and a wounded Gaddafi took cover in a drainage pipe with his surviving entourage.

NATO said on Friday it had struck 11 vehicles that were among 75 vehicles attempting to force their way out of Sirte, but said it was unaware that Gaddafi was travelling in the convoy.

“The vehicles were carrying a substantial amount of weapons and ammunition posing a significant threat to the local civilian population,” NATO said.

Pursuing NTC fighters fired at the group as they fled, then fought and killed some of the men guarding Gaddafi and took him captive, Reuters said, quoting witnesses.

Mahmoud Jibril, the NTC’s de facto prime minister, initially said Gaddafi had been killed in a “crossfire” and that it did not matter what happened to Gaddafi’s body “as long as he disappears”.

“He was alive up to the last moment, until he arrived at hospital,” in the city of Misrata, Jibril said.

Jibril pledged to resign after the fall of Sirte, which the NTC set as the final criterion for declaring the “liberation” of Libya.

New video has emerged in which Mutassim is seen trying to talk to his captors who taunt him. The grainy images, broadcast by Al Arrai television, purport to show he was captured alive, but events leading to his death remain unclear.

The footage of his final moments has prompted the UN to call for further investigation. 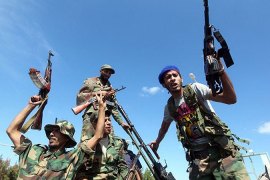 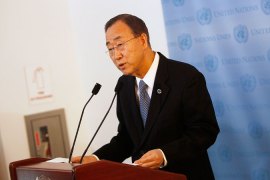 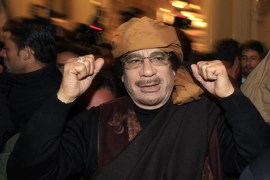 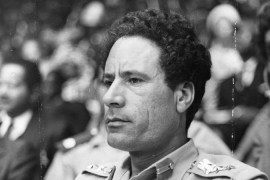