Aid workers from the International Committee of the Red Cross (ICRC) have delivered medical supplies to Sirte amid growing fears of a worsening humanitarian situation in the besieged hometown of Muammar Gaddafi, the ousted Libyan leader.

People streamed out of Sirte by the hundreds on Friday as Mustafa Abdel Jalil, chairman of the ruling National Transitional Council (NTC), said that NTC forces had called a two-day truce to allow civilians to leave.

But heavy rocket and mortar fire continued from both sides on Saturday, even as NTC commanders outside the town said they were trying to let civilians out.

The prolonged battle for Sirte, which is encircled by anti-Gaddafi fighters and under regular NATO air strikes, has trapped people inside. The town of about 100,000 has endured several fierce assaults over two weeks.

Fighting continued to the west and east of the town on Saturday. Loud thuds were heard coming from the town centre, and white smoke billowed into the sky while NATO planes roared overhead.

A truck carrying supplies and a car carrying European ICRC workers were allowed to pass checkpoints manned by fighters loyal to the NTC.

The ICRC delivered medical kits for treating up to 200 people wounded in the fighting to Sirte hospital, as well as 400 litres of fuel to run its generators, the organisation said.

Libyan fighters say they have completely surrounded the coastal city and are engaged in heavy clashes with his loyalists in the city’s streets.

On Saturday, NTC forces in Sirte said they have captured the headquarters of the Saadi Gaddafi brigades, an army unit led by Gaddafi’s third son.

Musatafa al-Rubaie, an NTC commander, told the Associated Press news agency that even though his fighters had surrounded Sirte from all sides, a path out had been left for civilians who still wanted to leave.

The top US commander for Africa said on Saturday that the military mission in Libya was largely complete and NATO’s involvement could begin to wrap up as soon as next week when allied leaders meet in Brussels.

Army General Carter Ham, head of US Africa Command, told AP that NATO ministers would review the situation and could decide to end the mission.

He said that US intelligence and surveillance assets, such as drones, would probably stay in the region for some time once the NATO mission ended, particularly to help the Libyan government with key issues such as border security and non-proliferation of weapons.

But he said air strikes would end, unless specifically requested by the Libyan transitional government. 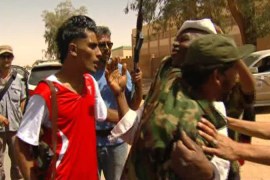 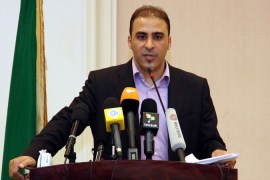 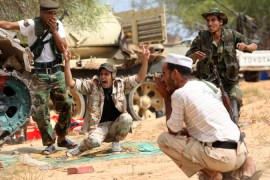 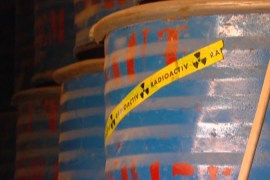