Students in Chile have erected burning barricades in at least 10 locations throughout Santiago, as part of a protest to demand free higher education.

Tuesday’s demonstration in the South American nation’s capital is the latest phase in a student movement that began in May.

Television footage showed police using water cannons against the protesters, and the office of President Sebastian Pinera referred to them as “the violent ones, the vandals”, who have “undertaken a series of actions that are absolutely to be condemned”.

Protesters threatened to continue demonstrating overnight – thousands are expected to take to the plazas this evening – and into the day on Wednesday.

In one incident in Santiago on Tuesday, masked assailants set fire to a city bus at  7:30am.

Calling for massive protest marches in the business district of Santiago, the students rejected further talks with the government, who they said had not met their demands of free public university education.

Currently, only 40 per cent of Chilean students qualify for free education based on their parents’ income.

The protests began as people used burning tyres, garbage, and debris to block traffic outside the city’s universities and schools.

The massive traffic jams in the city of six million were met by tear gas and water cannons being fired by the police.

Outside the humanities faculty of the University of Chile, a bus driver was injured when his vehicle was set alight by protesters; all the passengers managed to escape unharmed.

The relaunched protest movement is the biggest the nation has seen since previous negotations for sweeping educational reform in 1990 with the then president, Augusto Pinochet, broke down.

Calling for two days of protest, the Chilean Students Confederation along with 70 other organisations, including the nation’s largest labour confederation and a teachers’ organisation, aim to coincide their calls for educational reform with the larger youth-led Occupy Wall Street movement that has spread globally.

The Pinera government has offered scholarships to the most needy, but the president is “simply not willing to negotiate what the students and trade unions are asking for”, Al Jazeera’s Lucia Newman reported from Santiago.

The refusal comes at a time when the president’s “popularity is at an all-time low,” she said.

The movement has already delayed classes throughout Santiago for months, with demonstrations continuing to draw tens of thousands of students into the streets. 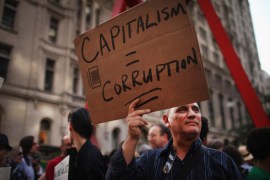 The demand for ‘economic justice’

Without a clear agenda and specific goals, what is the ‘Occupy Wall Street’ movement hoping to achieve? 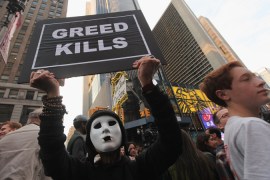 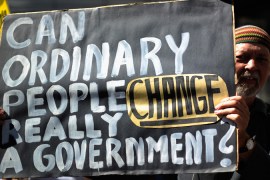 In pictures: Occupy the World

On October 15, protests against the financial industry and economic austerity erupted across six continents. 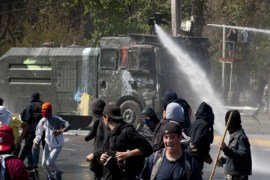 Students and government leaders begin negotiations, while thousands of protesters challenge police in the streets.