A senior US official has said that Washington has dropped plans to keep troops in Iraq past a year-end withdrawal deadline, although both the White House and the US defence department have distanced themselves from the comments.

The Associated Press reported on Saturday that the unnamed official had confirmed that all US troops would leave Iraq except for about 160 troops attached to the US embassy in Baghdad.

The decision to pull out fully by January would effectively end US involvement in Iraq war eight years after the invasion, despite ongoing concerns about its security forces and the potential for instability.

But recent reports have suggested the US was considering keeping significant numbers of troops in the country as trainers beyond 2011.

Tommy Vietor, a White House spokesman, told Al Jazeera that US President Barak Obama had “repeatedly made it clear that we are committed to keeping our agreement with the Iraqi government to remove all of our troops by the end of this year”.

But he added: “At the same time we’re building a comprehensive partnership with Iraq under the Strategic Framework Agreement, including a robust security relationship, and discussions with the Iraqis about the nature of that relationship are ongoing.”

The defense department issued an almost identical statement, but spokesman George Little also said, “Suggestions that a final decision has been reached about our training relationship with the Iraqi government are wrong.”

The senior US military official told AP the withdrawal could allow future, limited US military training missions if requested.

Throughout the months of negotiations, Iraqi political leaders have rejected giving legal immunity to US troops, a deal-breaker to Washington.

Nouri al-Maliki, the Iraqi prime minister, has won backing from Iraqi political leaders to keep some US soldiers in Iraq as trainers but has rejected giving them legal immunity, which Washington officials consider a deal-breaker.

Iraqis are still angry over incidents such as the Abu Ghraib prison scandal or Haditha, when US troops killed Iraqi civilians in Anbar province, and want American troops subject to Iraqi law.

Mark Kimmitt, a retired US brigadier general, told Al Jazeera that the AP report was “a clarification, not a denial.”

“The fact is that there has been trouble inside Iraq negotiating for immunities and privileges our soldiers must have,” Kimmit said.

“It would appear that the Iraqi government cannot get that through its parliament.”

“So they are putting that to the side in saying American forces won’t be needed after January 1, 2012,” he added. 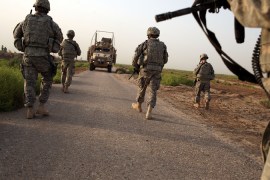 Iraq denies immunity for US troops after 2011

Baghdad says US military trainers are needed past December 31, but will not allow them to be above the law.