Uganda’s foreign minister has welcomed the deployment of US troops to help the country battle Lord’s Resistance Army rebels, but said the contingent of 100 combat-ready advisors was “well overdue”.

“For 20 years, the government of Uganda has been pleading with our American and European friends to help in the LRA problem, because these are international terrorists,” said Henry Okello Oryem, Uganda’s acting foreign minister, on Saturday.

“We wanted our friends to help in providing technical support, such as intelligence, because they have the best.”

Emira Woods, co-director of Foreign Policy in Focus, told Al Jazeera the fact that Uganda has oil played a factor in sending troops to the country.

“It goes back to one thing: oil. Lets remember Uganda has oil. It changes the calculus always with US foreign policy when it is a country that seems to be rich with this resource that has become almost an addiction for the US and the global economy.”

The LRA, formed in the late 1980s, is a rebel group whose leaders are wanted internationally for war crimes and which has been accused of massacres and forcing the displacement of millions of Ugandans.

US President Barack Obama said on Friday that 100 “combat-equipped” troops would help Uganda track down LRA chief Joseph Kony and other senior leaders, but he warned they would not lead the fighting themselves.

Al Jazeera’s Malcolm Webb, reporting from the capital Kampala, said that a small number of US forces are already stationed in the country, but the addition of 100 armed advisers would be significant and likely welcome by the many who have suffered from the LRA.

It remained unclear how close to the front lines the US advisers would go, our correspondent said.

“The LRA are not a professional army as such, as a lot of their soldiers are abductees, they’re children, they’re also not as well-equipped as they were in the past,” he said. “They used to have foreign backing from the government in [Sudan]. That’s thought to no longer be the case.”

LRA rebelsare accused of murdering, raping and kidnapping tens of thousands of people during a 20-year war in northern Uganda and neighbouring countries. Kony is accused of war crimes and is wanted by the International Criminal Court.

The mostly special operations forces could deploy in Uganda, South Sudan, the Central African Republic and Democratic Republic of Congo, subject to approval of regional governments, Obama said in a message to Congress.

Uganda’s defence spokesman Felix Kulayigye said the first batch of US troops were already in Uganda.

“Some of the forces are already in the country,” Kulayigye said. “Their approach is regional: DR Congo, Central African Republic, South Sudan and Uganda. How far they will go depends on the co-operation arrangements.”

Obama said the US troops would act as advisors to local forces with the goal of removing Kony and other senior leaders from the battlefield. But he said they would not lead the fighting themselves.

“Although the US forces are combat-equipped, they will only be providing information, advice, and assistance to partner nation forces,” Obama said.

“They will not themselves engage LRA forces unless necessary for self-defence. All appropriate precautions have been taken to ensure the safety of US military personnel during their deployment.”

The president said a small group of troops deployed on Wednesday and that additional forces would deploy over the next month.

General Carter Ham, the head of US Africa Command, said last week that his best estimate was that Kony was probably in the Central African Republic.

Jendayi Frazer, former assistant secretary of state for African affairs in the administration of George W Bush, told Al Jazeera that the LRA had destabilised the region and posed a threat to US allies and American national security.

“It’s again undermining a nation that the United States is strongly invested in its stability and its democratic progress,” she said. 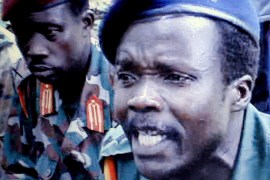 Timeline: US military activity in Africa 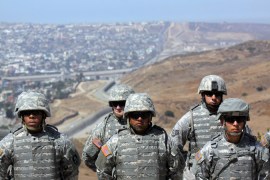