US police have arrested a number of people in New York after a march towards the city’s financial district, to celebrate the postponement of a clean-up plan of a park that has become the focal point for the ‘Occupy Wall Street’ movement, ended with scuffles.

The New York Police Department said that 14 people were arrested on Friday when protesters ignored police instructions to remain on the pavement so as not to impede traffic.

Elsewhere in the US, 23 people were detained in Denver after 135 officers moved in early Friday to evict protesters camped out in front of the state capitol building, Sergeant Mike Baker from the Colorado State Patrol told AFP news agency.

Ten others were arrested in Seattle, Washington, and another man in San Diego, California, police there said.

A planned clean-up of Zuccotti Park in lower Manhattan was delayed just hours before it was due to begin on Friday.

Hundreds of protesters have been camped out on the square and the police order to evacuate during the cleaning was seen as a ruse to ensure their eviction.

At the final hour, Brookfield Properties, the owners of the publicly accessible park, said they were delaying the cleaning and that protesters could stay for now.

The Occupy Wall Street movement said that “this development has emboldened the movement and sent a clear message that the power of the people has prevailed against Wall Street.”

Michael Bloomberg, the mayor of New York, in his weekly radio address on Friday, said his office was not involved in the decision to postpone the cleanup.

“My understanding is that Brookfield got lots of calls from many elected officials threatening them and saying, ‘If you don’t stop this, we’ll make your life much more difficult’,” Bloomberg said, adding that he did not know which officials had called the company.

Brookfield Properties “believes they can work out an arrangement with the protesters that will ensure the park remains clean, safe, available for public use,” Cas Holloway, the deputy mayor, said.

Protesters were jubilant, chanting, “People united will never be defeated!”

“It is a big victory for us,” said Senia Barragan, a spokeswoman for the demonstrators, explaining that the movement had been helped by the large numbers who came out to support them.

A small band of protesters began camping out in Zuccotti Park last month, preaching an anti-capitalist message that has resonated with many in a country gripped by high unemployment and a struggle to emerge from a painful recession.

Sister protest groups have sprung up in other major US cities, and Al Gore, the former vice president turned climate change activist, became the latest high-profile name to throw his support behind the movement.

Up to 600 protesters have been camping out overnight in the New York park, and there are now signs of permanence, such as food stalls, medical care and an information desk.

In Boston, some 700 police launched the biggest crackdown so far on the movement on Tuesday, descending on parks to arrest more than 100 protesters for unlawful assembly.

A poll by Time magazine showed 54 per cent of Americans had a somewhat favourable or very favourable view of the protesters, while 23 per cent disapproved and the remaining 24 per cent of those surveyed were undecided. 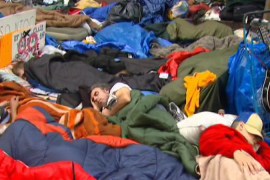 Camping out in protest at New York park 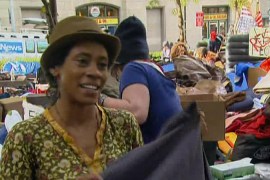 ‘Occupy Wall Street’ demonstrators baulk at background of executives from some of the largest corporations in US. 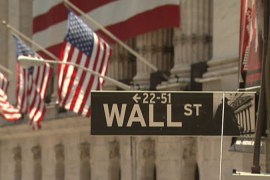 Paul Rosenberg concludes his analysis of critical deficits leading to the “Occupy” movement sweeping the nation.