There is confusion about attacks that took place in the early hours of the morning near Wana in South Waziristan, a in Pakistani on the Afghan, killing nine people, Al Jazeera’s producer in Pakistan said.

Al Jazeera’s Hameedullah Khan reported that residents in the area say that helicopters, which they believe to belong to NATO, attacked Birmal at around 1:30am on Saturday.

However, Khan said that when he confirmed with the Pakistani military, a senior military official denied the attacks had taken place as reported.

The official did, however, confirm that US drones strikes in South Waziristan were responsible for the incident.

This follows two other attacks in separate locations, in Baghar and Dre Nishtar, in South Waziristan, on Friday. The total number of confirmed deaths is 10, said Khan.

He said that other unconfirmed reports indicate that local and foreign Taliban and al-Qaeda members were killed in the attack.

Khan also confirmed other reports that fighters loyal to Maulvi Nazir, a Pakistani warlord and militant commander, who is accused of working with the Taliban and is alleged to have direct cross-border attacks, were being targeted.

Nazir and his fighters are thought to be behind attacks on the Pakistani government for its links with the US government on the war on terror.

Nazir is also reported to abduct civilians for ransom to fund his attacks, said Khan.

There has been a lull in attacks in the area in the past couple of weeks and Khan said life was returning to normal.

Major General Athar Abbas, the Pakistani military spokesperson, had declared South Waziristan a successful operation in flushing out fighters from the area.

He said the Pakistan military is after them and has conducted operations in Mohmand Agency, Bajaur Agency, Khurram Agency and Khyber Agency – all part of Pakistan’s federally administered tribal areas, as well as in Swat.

Abbas also said that surgical operations are still ongoing against anti-government fighters. He said that “so-called Pakistani Taliban are on the run”.

Abbas said that the reduced number of bomb blasts, suicide attacks and target killings are signs that the attacks have decreased and, that he was hoping that soon they will be totally rooted out from this country, said Khan.

However, Khan said that isolated Pakistani military and US drone attacks still took place because some areas, where the few remaining Taliban and al-Qaeda fighters were hiding or entered the country from Afghanistan, were otherwise inaccessible to the military.

The strike Saturday, was the latest in a string of missile attacks targeting the border region which is populated by Pakistani and Afghan Taliban fighters. It comes as US pressure on Pakistan mounts for action against Afghan fighters in the region.

On Thursday, a strike in North Waziristan killed Janbaz Zadran, who US officials say was a top commander in the Haqqani network and helped to orchestrate attacks in Kabul and south eastern Afghanistan.

A US official in Washington described a commander in the Al-Qaeda linked Haqqani network who was killed on Thursday as “the most senior Haqqani leader in Pakistan to be taken off the battlefield”.

This year alone, there have been more than 50 strikes, most of them in the North Waziristan region, a Haqqani stronghold.

Washington has regularly used drones since 2008 to attack fighters and their hideouts in the Pakistani tribal regions.

While Pakistan publicly protests the strikes, which are unpopular in the Islamic nation, and US officials do not acknowledge the CIA-led programme, US officials have said that the missiles are killing militants and their supporters.

Human rights groups do not agree. They say civilian deaths are common. 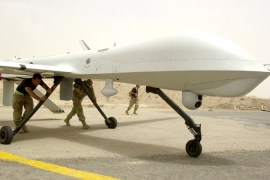 Officials say Janbaz Zadran, along with at least seven others, killed in latest US drone strikes in Pakistan.

Officials say seven fighters have been killed by missiles fired from unmanned aircraft in North and South Waziristan. 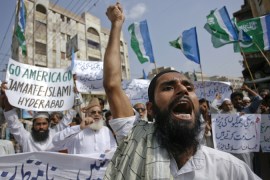 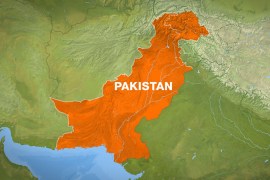