The UN has temporarily suspended all non-lifesaving aid operations in Dadaab, the world’s biggest refugee camp, following the kidnapping of two Spanish aid workers near the Kenya-Somalia border, a UN spokeswoman has said.

Hundreds of staff have been confined to their offices, forcing the cancellation of services like education, counselling and the relocation of families until further notice.

“Only water, food and health services are being maintained,” UN refugee agency spokeswoman Needa Jehu-Hoyah said on Friday. “This will of course have an impact on the poor refugees.”

In recent months, tens of thousands of refugees fleeing a spreading famine in southern Somalia have swollen the severely overcrowded camp.

There are nearly half a million people in Dadaab, a sprawling, dusty wasteland about 80km from the Somalia-Kenya border, most of them from Somalia.

The two Spanish women, 40-year-old Montserrat Serra and 30-year-old Blanca Thiebaut, were working as logisticians for Medecins Sans Frontieres (MSF) when gunmen seized them on Thursday after shooting and injuring their driver.

Kenyan police said they were pursing the kidnappers toward the Somali border on Thursday.

Al-Shabab, Somali’s biggest armed anti-government group has denied it was responsible for the kidnappings.

MSF, which has been providing medical aid in Dadaab since 2009, has already pulled most of its staff out of Dadaab, a spokesperson told Al Jazeera.

Jane Alice Okello, a senior legal protection officer with the UNHCR in Dadaab, told Al Jazeera that the MSF’s decision to leave Dadaab “is very sad and will obviously have a huge impact on roll out of health services in the refugee camps”.

“Hospitals are already overburdened and those living on the outskirts where medical facilities were just being set up, will now have to go for treatment in the hospitals at the IFO-1 camp or the Hagadaley camp,” she said.

“Another serious issue emerging is that the MSF have also left Liboi, the Kenyan town on the border with Somalia, where new arrivals are screened and their health assessed before they make their way to Dadaab.

“This was a very important service for people making their way from Southern Somalia and Dobley and the new developments are going to add a lot strain to the system”.

The ban on non-essential movement for UN staff and their partners from aid groups would remain in place until further notice, Jehu-Hoyah said. But the UN was working closely with the Kenyan government to improve security.

She said more police have been deployed and extra checkpoints set up.

Security has long been a concern at Dadaab, where representatives from various factions seek to recruit disaffected young male refugees as fighters.

Aid workers live in guarded compounds surrounded by high barbed-wire walls, and the UN requires its staff to travel in the camps with armed escorts.

The suspension does not just affect the UN. Most of CARE’s, a Christian humanitarian organisation, 250 workers in Dadaab are confined to the compound, said Juliett Otieno, a spokeswoman for the relief agency.

“The only ones going out are those who perform lifesaving services,” she said. “We don’t know how long it will last.”

The kidnapping is believed to be the first such seizure of foreign aid workers from the camp, although Somalis have kidnapped two other Europeans from Kenya in the past six weeks.

The border between Kenya and Somalia is long and porous and both refugees and fighters can cross with ease.

On October 1, Somali gunmen took a wheelchair-bound French woman from her home near the resort town of Lamu. Somalis also abducted a British woman from a Kenyan coastal resort in September. Her husband was killed in the attack. 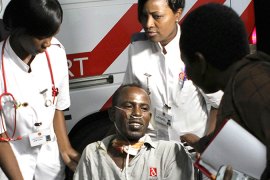 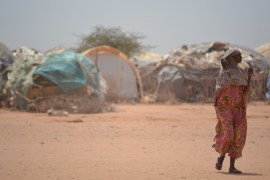