Libya’s National Transitional Council says that Muammar Gaddafi, the country’s toppled leader, is in the southern desert region of the country, and that it is only a matter of time before he is captured.

Abdul Hafiz Ghoga, the vice-chairman of the NTC, told Al Jazeera on Thursday that satellites have been tracking the former Libyan leader south of Sabha.

“We have confirmed reports that Gaddafi is in the southern Libyan desert. He’s not staying in one place. He is moving around with a small convoy which consists of his closest aides and bodyguards,” he said.

Ghoga added that the fighters’ priority is currently to take full control of Sirte, Gaddafi’s hometown and one of the last places still contested between the NTC and Gaddafi loyalists.

“Once the liberation of Sirte has been achieved – our fighters will track down Gaddafi himself.”

NTC commanders have moved up tanks into the ousted leader’s hometown to fire at buildings from close range to try to dislodge the remaining snipers loyal to Gaddafi who are now surrounded on all sides in one small part of the city.

Die-hard loyalists to the deposed leader have not given up the fight, answering NTC attacks in the city with small arms fire and rocket-propelled grenades. An NTC commander said Gaddafi’s besieged forces were no longer using heavier weapons.

Al Jazeera’s Tony Birtley, reporting from the frontline in Sirte said that he felt it was just a matter of time before Sirte falls into the hands of the revolutionary forces.

He said that while positions had not moved in the past 24 hours, anti-Gaddafi forces had been pinned down by heavy return of fire from the pro-Gaddafi forces.

“This is the day, Friday, that they expected it all to be over. It’s not…The fall of Sirte will mean to these people, people all over Libya that this war is over.”

Earlier, on Thursday, Khaled Alteir, a field commander in Sirte, had said, “We have control of the whole of the city except neighbourhood ‘Number Two’ where the Gaddafi forces are surrounded,” .

Green flags, the banner of Gaddafi’s 42-year rule, still fly above many buildings in Sirte, but, another NTC commander said, the defending forces appear to have lost their cohesion.

Some captured fighters have been roughed up by NTC forces and Amnesty International issued a report on Wednesday saying Libya’s new rulers were in danger of repeating human rights abuses commonplace during Gaddafi’s rule. The NTC condemned practices highlighted in report.

“Such acts could have possibly been perceived as acceptable at the beginning [of this revolution], given the brutal crimes committed by Gaddafis mercenaries – however today – they are unjustifiable,” Ghoga said.

Close to the centre of the fighting in Sirte, government forces found 25 corpses wrapped in plastic sheets. They accused groups loyal to Gaddafi of carrying out execution-style killings. Five corpses shown to a Reuters news agency team wore civilian clothes, had their hands tied behind their backs and gunshot wounds to the head.

One field hospital received two NTC dead and 23 wounded on Thursday. One of the dead men had been hit while taking food up to the fighters on the frontline, doctors said.

Philipp Roesler, Germany’s economy minister, said 150 wounded Libyans would be treated in Germany. Berlin plans to support Libya with medical supplies and aid and help in training and educating young Libyans, he said.

“We are here because we see the most important raw material of Libya, it is not oil and gas…[it is] the younger people who started the revolution here. They need future and perspective after their victory,” Roesler told a news conference in Tripoli.

In another development, Ali Tarhuni, the NTC’s oil minister, vowed that Libya would investigate “every penny” of suspicious oil contracts signed under Gaddafi’s regime, which was responsible for what he called “unbelievable corruption”. 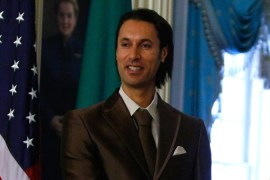 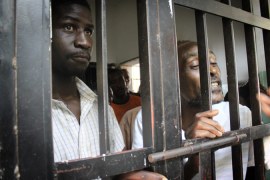 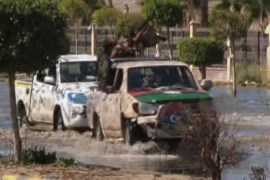