Barack Obama, the US President, has promised tougher sanctions against Iran over an alleged plot to kill the Saudi ambassador to Washington.

But some are questioning whether further measures against Tehran will be effective.

The Iranian Republic is already weighed down with economic penalties, some dating back for more than 30 years, which have so far failed to alter the country’s political course. 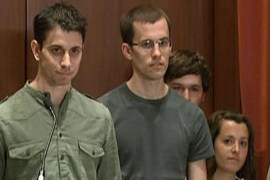 ‘Hikers’ held in Iran ‘due to US citizenship’

Two US men released after being jailed for spying say they were caught up in political crossfire between two countries.