Britain’s Defence Secretary Liam Fox has resigned following scrutiny over his close friendship with a businessman with defence-related interests.

A stream of news stories about Fox and his former flatmate and best man Adam Werritty, who met frequently with Fox and falsely identified himself as his adviser, had eroded the minister’s credibility ahead of an inquiry into the affair that was due to be published within days.

Al Jazeera’s Jonah Hull, reporting from London, said: “The whole episode was going to be difficult for the Prime Minister David Cameron, and the resignation of Liam Fox has spared the prime minister the choice to sack him, if the inquiry had gone against Mr Fox.”

In a letter to the prime minister, Fox denied any wrongdoing but admitted he had allowed the divide between his personal and professional lives to become “blurred”.

“The consequences of this have become clearer in recent days. I am very sorry for this,” he said.

“I have also repeatedly said that the national interest must always come before personal interest.

“I now have to hold myself to my own standard. I have therefore decided, with great sadness, to resign from my post as secretary of state for defence,” said Fox.

In a letter to Fox, Cameron said he was “very sorry” to see the minister go and praised the “superb job” he had done.

“You have overseen fundamental changes in the Ministry of Defence and in our Armed Forces, which will ensure that they are fully equipped to meet the challenges of the modern era,” he said. 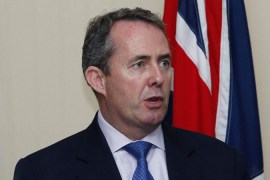 Liam Fox investigated over claims that he allowed a close friend to influence government business.