Ukraine’s state security service, the SBU, has directly linked jailed former prime minister Yulia Tymoshenko to another criminal probe, alleging her involvement in running up a $405 million debt to Russia on behalf of the Ukrainian state.

Ukraine has issued mixed signals on her fate with the president hinting she could be released after a legal reform – as new corruption charges were being filed against her.

Al Jazeera’s Neave Barker reporting from Moscow says the charges stem from her time as the owner and director of an energy company after allegedly colluding with the former prime minister to off-load its debt onto the government’s books.

An SBU spokeswoman when asked to clarify how that was done, Ostapenko only said, “As the premier, she could do anything.”

Barker reports that Tymoshenko, despite her political prowess, does have a chequered past and this latest probe is a reminder of a case in 2001 when she was charged with fraud as well as other accusations by former president Leonid Kuchma of abusing her position as prime minister. She was cleared of those accusations.

She was also charged in 2010 of misusing $290 million of money generated by carbon bonds that she is said to have used to keep her political ambitions afloat, our corespondent says.

The United States and the European Union have condemned this week’s sentencing of Tymoshenko to seven years in prison for abuse of office.

In response to that Western criticism, President Viktor Yanukovych said Thursday that he backs legislative changes that could free her from jail.

Tymoshenko was found guilty Tuesday of exceeding her authority in signing a gas deal with Russia in 2009.

She dismissed her trial as Yanukovych’s attempt to remove her – the country’s top opposition leader – from politics.

Yanukovych said the Soviet-era law that served as a basis for Tymoshenko’s conviction was outdated and should be changed.

The law “has been classified as part of administrative offenses or political cases around the world, in many countries. If you ask me, ‘Do I agree with it? Without, a doubt, I agree,'” Yanukovych told reporters.

He suggested that the amendments could be adopted in time for an appeals court to review the case.

“If the relevant bills are passed before the appeals hearing, the appeals court will definitely take them into account while hearing the case,” he said.

Parliament last week gave initial approval to a bill to decriminalise some economic offenses but that bill contained no mention of the statue under which Tymoshenko was charged.

Parliament is to consider that bill again next week and some analysts believe it could be amended to include Tymoshenko’s charge.

Besides the new charges and the gas conviction, Tymoshenko is also the subject of two other corruption investigations, which she dismisses as a “witch hunt.”

Tymoshenko’s top aide Oleksandr Turhchynov dismissed the new charges as “absurd” and said the latest case was aimed only at making sure that Tymoshenko was locked away in prison.

Last year she ran for president but lost to Yanukovych.Tymoshenko was one of the leading figures of the 2004 Orange Revolution that protested a fraudulent election in which Yanukovych was named the winner.

A court-ordered rerun of the election tossed out Yanukovych’s win and brought Viktor Yushchenko to power, but he and his one-time ally Tymoshenko quarreled bitterly during much of his presidency.

Many Ukrainians were puzzled by Thursday’s new charge against Tymoshenko. 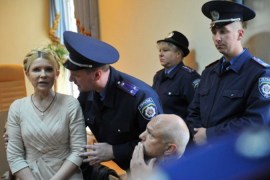 Tymoshenko vows to fight on after being found guilty of abusing her authority in trial criticised by US, EU and Russia. 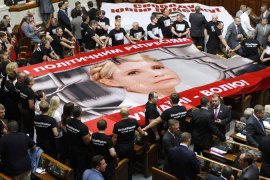 Former prime minister tells court trying her for abuse of office, they have humiliated the country.