The discovery of a firebomb on rail tracks in Berlin has increased fears of renewed attacks by left-wing groups in Germany.

Security at railway stations has been stepped up following the discovery of the sixteenth explosive device in in nine locations in less than a week.

Hundreds of trains have been delayed because of partial shutdowns, but there have been no injuries.

A previously unknown leftist group claimed responsibility for the bomb, saying they were protesting against Germany’s military involvement in Afghanistan and the country’s role as an arms exporter. 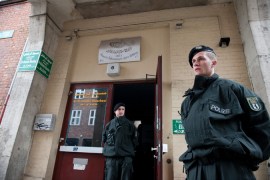 Two suspects detained in Berlin on suspicion of planning a bomb attack after acquiring large amount of chemicals.