Umar Farouk Abdulmutallab, the Nigerian man accused of trying to blow up a bomb in his underwear aboard a US airliner on Christmas Day in 2009, has pleaded guilty to all charges against him and warned the US of “a great calamity”.

Abdulmutallab has been charged with eight felonies, including conspiracy to commit an act of terrorism, attempted murder and attempted use of a weapon of mass destruction.

The 24-year-old’s guilty pleas were made a day after testimony began in his trial in Detroit.

Judge Nancy Edmunds asked the defendant if he wanted to plead guilty to the charges against him and as she read out each charge against him, Abdulmutallab said: “I plead guilty.”

He told the judge that he was fulfilling a “religious duty” by participating in an act of jihad against the US.

Abdulmutallab said the planned attack was meant to avenge the deaths of “innocent Muslims” in Yemen, Afghanistan and elsewhere.

“The US should be warned that if they continue to kill and support those who kill innocent Muslims, then the US should await a great calamity … or God will strike them directly,” Abdulmutallab said.

“If you laugh at us now, we will laugh at you later.”

Al Jazeera’s Patty Culhane said the defendant’s pleas were “a bit of a shock” as the trial was expected to go on for days, possibly weeks.

“If these charges hold, if this defence line continues, and he does in fact pleads guilty to all these charges, he could face anywhere between 30 years to life in prison.”

Nearly 300 people were aboard the the Northwest Flight 253 on December 25, 2009 – 279 passengers, eight flight attendants and three cockpit crew members.

According to a witness in the trial, a passenger who helped subdue Abdulmutallab on the plane, he was wearing underwear which looked like adult nappies and were bulky and burning.

Abdulmutallab tried to ignite a device sewn into the underwear, which ultimately malfunctioned and burned him, the witness said.

No guilty pleas had previously been entered on behalf of Abdulmutallab, who was representing himself in the trial with help from a lawyer.

“What we have seen from him in the past are outbursts where he has had to be removed from the courtroom for screaming things such as ‘Osama bin Laden is alive’,” Culhane said.

“On Tuesday, whenever al-Qaeda was mentioned, we believe he stuck a finger up in the air.”

Al-Qaeda’s Yemen-based arm claimed responsibility for the attack, which was also praised by bin Laden months before the al-Qaeda leader was killed in a US raid in May in Abbottabad, Pakistan.

Abdulmutallab previously told US investigators he had received the bomb, which failed to detonate fully, and training from al-Qaeda members in Yemen, US officials have said. 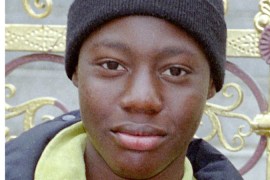 Trial of ‘underwear’ bomber begins in US

Prosecution says Nigerian man admits he attempted to blow up US airliner with hidden explosives.

US court to pick jury in jet-bombing bid case

Nigerian Umar Farouk Abdulmutallab, accused of trying to blow up aircraft in 2009, to serve as his own defence.