Tens of thousands of Syrians have rallied in central Damascus in show of support for President Bashar al-Assad, who is battling a six-month uprising against his rule in which the UN says about 2,900 people have been killed.

“America, out, out, Syria will stay free,” chanted the crowd on Wednesday, many of them carrying pictures of Assad and Syrian flags.

They also shouted slogans warning the European Union not to intervene in their country. “God, Syria and Bashar,” they sang.

At the start of the demonstration, a man holding the flags of Russia and China, which vetoed a European-drafted resolution against Syria at the UN last week, flew over the crowd, suspended from a helicopter by rope.

It was the biggest demonstration for months in the centre of the capital, which has been relatively untouched by the protests which have rocked Damascus suburbs and other parts of the country.

Speaking to Al Jazeera, Nir Rosen, journalist and author, said: “We might not like to think that but authoritarian regimes sometimes have popular support.

“In the whole of the Arab countries, certainly the Syrian regime has the largest base of popular support and much of the country still supports him [Assad].

“Not only Alawite and the Christian community, but even Sunni Bourgeoisie in Damascus and Aleppo support President Assad.”

“They may be afraid of the unknown, or the civil war, or they may genuinely believe that Assad has done good stuff for the country.

“The regime is kind of a marriage between Alawite-dominated security forces and the Sunni business class.

“See the Iraq scenario, Christians of Iraq were destroyed, they came to Syria in large numbers. So, Christians fear what may happen to them?

“The opposition has failed to reach out successfully to Alawites, Christians and Druze. Many of them believe there will be civil war should the regime fall, and I think it is quite likely.”

Assad has responded to the protests with a promise of reforms and a military crackdown on protesters in which more than ten thousands have been arrested, according to activists.

On Wednesday, a prominent dissident Walid al-Bunni, who was arrested in August, was freed on bail, his lawyer Michel Shammas told AFP news agency.

In 2000, Bunni was one of the prime movers of the short-lived “Damascus Spring” amid hopes for reform that followed Assad’s accession to the presidency after the death of his father, Hafez al-Assad.

There have also been increasing reports of clashes between security forces and opponents, made up of deserting troops and gunmen.

Authorities blame armed groups for the violence and say 1,100 members of the security forces have been killed.

The US and the EU have imposed sanctions on Syria and called on Assad to step down.

Russia and China have blocked Western efforts seeking UN action against Damascus, but have told Assad he must speed up reforms.

Meanwhile, Sheikh Hamad bin Khalifa Al-Thani, the Emir of Qatar, who led the Arab response on the Libyan revolution, has spoken for the first time about the Syrian opposition National Council.

The Emir hailed as an “important step” the creation of a Syrian opposition front, urging Assad to talk to them.

“I think this council is an important step and for the benefit of Syria,” the Emir said.

“If the Syrian government and the council, which I think has been given legitimacy from the protesters, can start talks on a new constitution to maintain the Syrian values and build its future, that would be a good step.”

On Monday the EU welcomed the council’s formation and urged the world to do the same.

The broad coalition of opposition, which aims to provide an alternative to the Assad government, was formed in September. 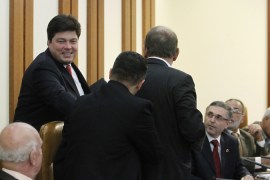 Appeal made for national dialogue following Medvedev’s warning that Syrian leaders should enact reforms or step down. 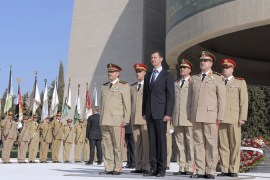 Assad’s Alawites: The guardians of the throne

Syria’s Alawite community have a history of persecution, but dominate the ruling family’s security forces. 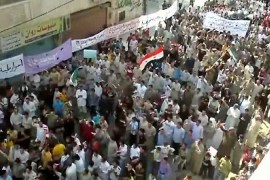