Thousands of people in Thailand are fleeing their homes as flood waters threaten to engulf entire villages and towns.

More than 250 people have been killed by monsoon rains in the past two months, and now authorities are working around the clock to stop waters from reaching the capital, Bangkok.

Reporting from the northern Ayutthaya province on Tuesday, Al Jazeera’s Wayne Hay said: “So much of the flood waters lying around in the northern part of Thailand are on their way to … Bangkok.”

Yingluck Shinawatra, the Thai prime minister, said on Monday that government workers had two days to build three major water barricades before a runoff from the north reached Bangkok.

She said she did not know if Bangkok would be protected from the flooding.

“It is really hard to tell because it’s difficult to predict the volume of water,” Yingluck said. “But I insist if we can complete the three main water barriers within the next one or two days, Bangkok will be safe”.

The country’s Disaster Prevention and Mitigation Department has said 269 people have died, mostly from drowning, since tropical storms began hitting Thailand at the end of July.

It said 8.2 million people in 60 of the country’s 77 provinces have been affected by floods and mudslides, and 30 provinces are currently inundated.

The government planned to use 1.5 million sandbags to build the barriers but still lacked more than 100,000 as of Monday.

In Ayutthaya province, to the north, flooding forced more than 200 factories in two industrial zones to shut, including the Japanese car manufacturer, Honda, whose production plant suffered water damage.

Floods also inundated Thailand’s eastern neighbour, Cambodia, where at least 207 people have died since August, when waters from the Mekong River and mountainous areas.

The floods have affected 1.2 million people and damaged more than 1,000 schools and 400 Buddhist temples.

Hundreds of people have been killed across Southeast Asia, China, Japan and South Asia in the last four months from prolonged monsoon flooding,typhoons and storms. 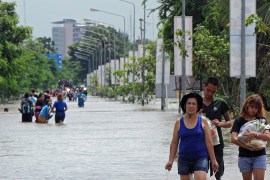 Thai PM forced to postpone official visits as death toll hits 250 while in neighbouring Cambodia at least 160 are dead. 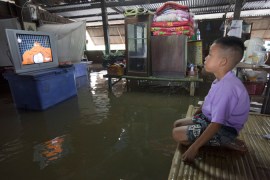 A look at the flooding across Thailand 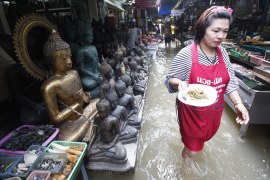 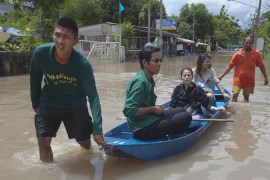 Monsoon rains swamp much of Asia

The monsoon rains have caused chaos across much of Asia