Egypt’s ruling military council has rejected the resignation of Hazem El-Beblawi, the deputy prime minister and finance minister, who had sought to quit in protest over deadly clashes on Sunday that left at least 26 people dead.

“I did not withdraw my resignation. The higher (military) council rejected it … and I am now in a difficult situation … I am confused,” Beblawi told Reuters by telephone.

“Beblawi was saying that while the government could not be directly linked to this violence, still in the end, it is the responsibility of the government to maintain security and prevent those kinds of incidents,” Rageh said.

A protest led by Coptic Christians in Cairo on Sunday against the destruction of a church in the southern province of Aswan, was met by violence, that killed 26 people.

The clashes were the worst violence Egypt had seen since the country’s revolution in February, which toppled long-time leader Hosni Mubarak.

Coptic Christians represent up to 10 per cent of the 85 million people in Muslim-majority Egypt.

They have long complained that they are treated as second-class citizens in their own country.

Beblawi’s resignation episode comes amid heightened criticism of Sharaf’s government, both over its handling of Sunday’s violence and its overall performance, our correspondent said.

“There are a lot of jokes, plays on words of Essam Sharaf’s last name, which means honour,” Rageh said.

“There are a lot of tweets going around, saying that this is a ‘guest of honor’-like government, not really an effective cabinet with real rulers.”

She also highlighted that this is “a government whose shelf life was imminently expiring anyway”.

“It is an interim cabinet that was sworn in in the summer, [and] we have parliamentary elections [coming up] in November,” Rageh added.

“So it’s not like it was going to stay for a while.”

Sharaf said Sunday’s sectarian violence was not representative of “the relationship between one Egyptian and another Egyptian, or a Muslim and a Christian”.

“The situation in Egypt… there is no doubt that what is going on, based on feelings like this… it is something
strange,” Sharaf said on Tuesday, stressing that investigations are under way.

In addition to the public’s general dissatisfaction with the interim government, Beblawi had specifically been under intense criticism for the declining figures of the Egyptian economy in the past few months.

Egypt’s benchmark stock index took a beating on Monday, dropping over two per cent amid fallout from the weekend’s violence. 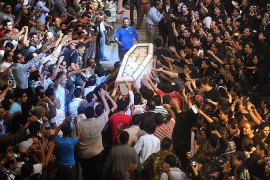 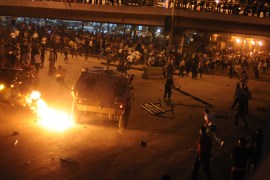 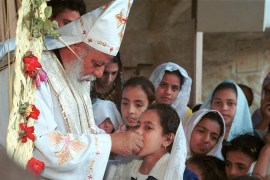 Disappearance of Coptic priest’s wife sparks tensions between Christians and Muslims in city of Al Minya.