Small amounts of oil from a container ship stuck on a reef off the coast of New Zealand has begun washing up at a popular recreational beach.

After beginning an operation on Sunday to extract up to 1,700 metric tonnes of oil from the stricken ship, marine crews halted pumping work on Monday due to worsening weather.

They managed to removed just 10 metric tonnes of oil before work was called off ahead of forecast gale-force winds and swells.

Maritime New Zealand (MNZ), the agency responsible for shipping in the region, said the work was called off in order to keep crews safe.

The operation is expected to last at least two more days once it resumes.

“The weather is expected to deteriorate in the coming days, so we are working around the clock to remove the oil,” the agency said in a statement.

Salvage experts and naval architects are on board to monitor the ship, and sensors should indicate if the ship is in danger of breaking apart, the agency said.

“The top priority is to first remove the oil, then lighten the vessel by removing the containers, and finally, move the ship off the reef,” said the statement.

The MV Rena has already leaked 20 to 30 tonnes of oil since it struck a reef in the Bay of Plenty on Wednesday.

The Liberia-flagged “Rena” struck the Astrolabe Reef about 22 kms from Tauranga Harbour on Sunday, and has been foundering there since.

The 236-metre ship has been leaking fuel, leading to fears it could cause an environmental disaster if it falls apart.

A New Zealand navy vessel, the Endeavour, will be used as a command platform for the operation, with 200 people working on the operation.

John Key, New Zealand’s prime minister, who flew over the scene in a helicopter on Sunday, said two inquiries to determine why the ship had collided with the Astrolabe Reef were already under way.

“People know about the reef, and for it to plough into it for no particular reason – at night, in calm waters – tells you something terrible has gone wrong and we need to understand why,” he told Radio New Zealand.

“This is a ship that’s ploughed into a well documented reef in calm waters in the middle of the night at 17 knots. So, somebody needs to tell us why that’s happened,” Key said.

In a statement, the owners of the ship, Greece based Costamare, said they were “co-operating fully with local authorities” and were making every effort to “control and minimize the environmental consequences of this
incident.”

The company did not offer any explanation for the grounding.

New Zealand authorities said they would make it a priority to remove those goods as part of their operation. 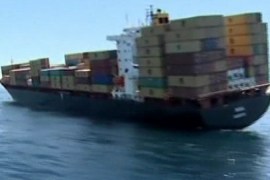 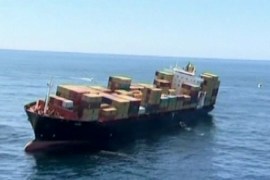 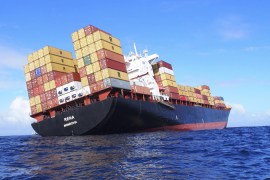 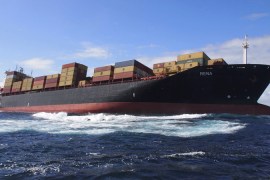