A count of 99.2 percent of all districts shows that Tusk’s pro-marke Civic Platform won 39.2 per cent of the vote, against 30 per cent for its conservative challenger, the Law and Justice Party.

Tusk, 54, appears to have been rewarded for presiding over four years of strong economic growth, as Poland has been the only EU member state to avoid recession, and this year its economy is forecast to grow by about 4 per cent, the highest rate among the EU’s seven largest economies.

The electoral commission said Civic Platform’s 39 per cent would turn into 206 seats in the 460 member lower chamber, with its junior partner, the People’s Party, winning 8.6 per cent of the vote, or 30 seats.

Both parties would hold a five-vote majority in the lower house of parliament if they continue their partnership.

Tusk said he would work on forming a coalition and that his party will continue to favour a coalition with the Polish People’s Party.

The leader of the Law and Justice Party, Jaroslaw Kaczynski admitted defeat after his party won 157 seats.

Jaroslaw had served as prime minister from 2005 to 2007, with his twin brother, Lech, as president. Lech Kaczynski died in a plane crash with 95 others in April 2010. 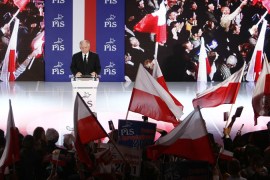 The vote will determine whether PM’s Civic Platform party gets another term after four years of strong economic growth.