The former president of Cape Verde has been awarded a prestigious $5m prize recognising excellence in African leadership.

Pires, who led the former Portuguese colony off Africa’s northwest coast for a decade until August, is the first winner of the award, funded by the Mo Ibrahim foundation, since 2008 because no suitable candidate could be found in recent years.

Organisers of the award, established in 2006 by Sudanese telecoms giant Mo Ibrahim to improve the quality of African governments, also praised Pires for his decision this year not to run for office again after the expiry of his second term.

Salim Ahmed Salim, the chair of the prize committee, told an audience in London, “President Pires’s democratic credentials were further enhanced when he announced he was stepping down at the end of his second term.”

Dismissing outright suggestions that the constitution could be altered to allow him to stand again, he said, “This is a simple matter of faithfulness to the documents that guide a state of law.”

“Throughout his long career, president Pires has been dedicated to the service of his people, including those in the diaspora, while retaining his humility and personal integrity.”

The Ibrahim Prize for Achievement in African Leadership carries a $5m prize paid over 10 years and $200,000 annually for life from then on.

Launched in 2006, the last winner of the prize was Festus Mogae, the former president of Botswana, in 2008. 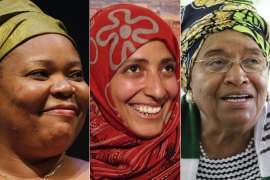 A president and two activists honoured for their non-violent campaigns in Africa and in the Middle East.