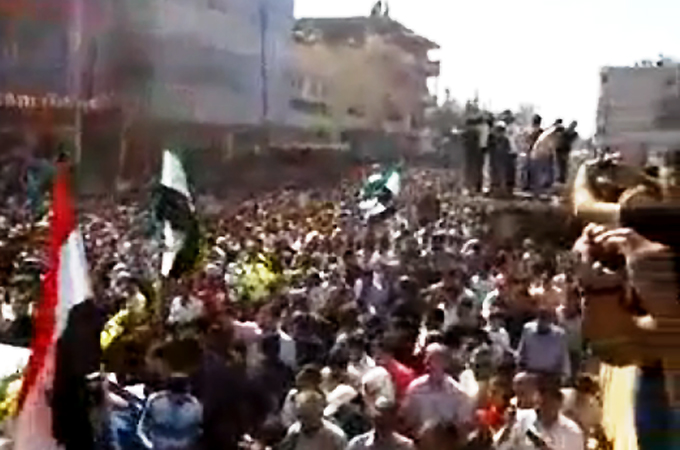 The European Union has welcomed the creation of an opposition council in Syria which is seeking international support for the six-month uprising against President Bashar al-Assad.

A statement on Monday by EU foreign ministers welcomed the moves by the political opposition in Syria to establish a united platform and called on the international community to embrace the efforts.

Earlier in the day, the newly formed council, which is a collection of opposition activists, said it had agreed on a democratic framework for the post-Assad Syria. The group said it wants international observers to be
allowed into the Arab state to examine the situation there.

“The EU notes the creation of the Syrian National Council as a positive step forward,” read statement issued by the 27 EU foreign ministers after a meeting in Luxembourg.

The EU, however, stopped short of any calls to recognise the body. Syria threatened on Sunday it would retaliate against any country that formally recognised an opposition body.

Although the formation of the council has already been welcomed by some of Assad’s Western critics, including the United States and France, they have not approved it diplomatically as they did the Libyan rebels who overthrew former dictator Muammar Gaddafi.

EU ministers and officials said any such moves, which would have to come from individual countries, were still some way off.

“I think we will have to find out a bit more yet,” said Catherine Ashton, the EU foreign policy chief. “We need to find out more and decide what we are going to do.”

Ashton continued: “I think we have been consistent in wanting to see significant change in Syria. The number of people who have died there is terrible.

“The continued approach of the government to repress people is awful. We’ve been working closely with our colleagues in the [United Nations] Security Council and with Turkey now in trying to put the pressure on.”

The UN claims 2,900 people have been killed in Assad’s crackdown on mainly peaceful protests.

The Syrian leadership blames armed groups backed by foreign powers for the violence, saying 1,100 members of the security forces have been killed since the unrest broke out in March.

William Hague, the British foreign secretary, did not directly reply when asked if EU states should recognise the council, but said he had met some opposition activists and continued to call on the government to end the violence.

“That is the immediate priority,” he said. “The EU as a whole and member states will want to appeal for [an end to violence]. Of course, we can’t directly intervene.”

Hague’s French counterpart, Alain Juppe, said France wanted to have contacts with the opposition, adding, “We are pleased to see the opposition has organised.”

In the latest wave of violence, at least 31 people were killed across Syria on Sunday in clashes between gunmen believed to be army deserters and government troops, a Syrian activist group said on Monday.

The London-based Syrian Observatory for Human Rights said the death toll included 17 members of the army and security forces. It added that 14 civilians were killed, many of them in the city of Homs, where heavy gunfire was heard again early on Monday.

Assad’s crackdown on protests against his 11-year rule has raged despite calls for a peaceful resolution of the crisis. International media are mostly barred from the country, making it difficult to verify accounts from authorities and activists.